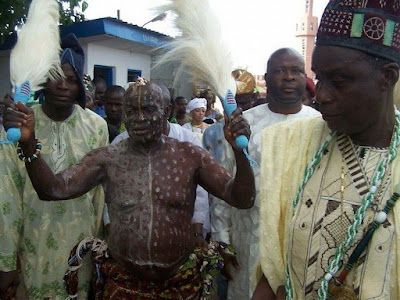 OONI of Ife Oba Okunade Sijuwade's burial has been put on hold after a man elected to be buried alive with the monarch absconded unwilling to be the one to keep the king company in the afterlife. Unconfirmed reports from Ile-Ife indicate that the designated person to be buried alive alongside the monarch, known traditionally as the Abobaku, took to his heels for dear life.

In Ile-Ife culture, the Abobaku is a person selected by the traditional chiefs to live and die with the king and is treated well and showered with a lot of care and gifts while alive. Apparently, the incumbent Abobaku ran away following the confirmation of the death of the Ooni earlier this month. Despite denials of the death by the Traditional Royal Council of Ife, he refused to wait for confirmation and has been at large ever since. According to Yoruba tradition, a king does not die alone and his burial rites include being buried with other people. An Abobaku lives his life for the king and is buried alongside the monarch.

In the authentic tradition, just as there is a lineage that becomes king, there is also always a family dedicated to the ancient belief of dying with the king. It is not yet clear if the Traditional Royal Council will go ahead with the funeral following the disappearance of the Abobaku. Earlier this month, the traditional authorities in Ile-Ife said that there will be no human sacrifice involved in the burial of Oba Sijuwade. Apparently, Oba Sijuwade abolished human sacrifices when he was still on the throne and was said to have appealed to the gods to help put a stop to human sacrifice, describing the act as barbaric, callous and inhuman.

Prominent Ifa priest, Chief Ifayemi Elebuibon, confirmed the abolition of the practice, adding that what will happen instead is that the cows will be dressed up to make them look like humans. Oba Sijuwade, 85, was the 50th monarch of Ile-Ife believed to be cradle of Yoruba civilisation and the ancestral home of all Oduduwa's offspring.