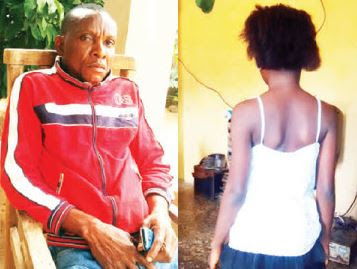 An eight-year-old girl has narrated how she was allegedly raped by their 48-year-old neighbour, Mr. Peter Christopher, one afternoon in the building her family shared with another tenant.

The girl, Blessing (not real name), explained to Saturday PUNCH that on Thursday, June 18, 2015, she was about to enter her parent’s apartment when, Christopher, a carpenter, whose lives just two doors away from their apartment, dragged her into his room, locked the door and defiled her.

Blessing was a jovial girl, she smiled a lot. But when it was time to tell the story of what she went through. Her face creased into a frown as tears streamed down her face.

Her elder sister urged her on to tell everything that happened.

“His (Christopher’s) wife had gone for a wedding programme that day. He was alone in the house.“I was playing outside before but as I came in and was about to open our door, he moved near me and dragged me by hand into their room.

“He locked the door and pulled down my panties. He then put his ‘thing’ inside me. That was the only time he did it.”

Blessing’s mother explained how she found out able the defilement of her daughter.

“I did not know anything until the night when she told me that her private part was hurting her. I did not suspect anything and she did not tell me anything.

“I rubbed Vaseline on her to ease the pain but the following day when I wanted to bathe her, I realised that she was bleeding. I then suspected that somebody had been touching my daughter.

“As soon as I asked who had been touching her, she told me that it was our neighbour. He is even older than my husband!”

Christopher has a daughter of his own, who is in the same age group as Blessing.

He was arrested and detained at the Agbado Police Division, while the girl was taken for test and treatment.

While Christopher was in detention, he continued to deny that he ever touched the girl. But Blessing said he had no reason to lie while her parents said they believed their daughter.

However, after the pressure of numerous pleas from pastors and landlords in the area became too much, the girl’s parents were forced to write a letter to withdraw their case.

In order to douse the tension generated on the case, their landlady also signed an undertaken on Christopher’s behalf, and agreed to pay the sum of N25,000 in five instalments to Blessing’s parents.

“I just don’t know what that money is for because I have refused to take it. Is it for my daughter’s treatment or compensation? If it is for treatment, what I spent on her treatment, tests and drugs is even more than that,” the girl’s 41-year-old father said.

Our correspondent went in search of Christopher on Wednesday to get his side of the story. The fair complexioned man courteously offered our correspondent a chair but his attitude changed instantly when asked if he indeed raped the girl.

He demanded to know who notified our correspondent about the case. But when asked how that affected the allegations brought against, he refused to say anything further.

“If you cannot tell me the name of the person who made the allegations against me, I cannot say anything further,” he said.