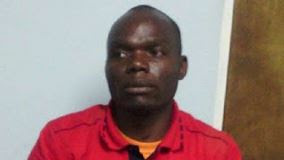 Pastor Madaristo Ranch, the General Overseer of a Zimbabwean church, Living Word Ministries, has been arrested after he beheaded his pregnant wife, Pamela Muzondi, with a kitchen knife and hiding the corpse in a bowl in the bedroom.

After his abominable act, he calmly went to his church and conducted the service before fleeing towards the Mozambican border.

He was arrested before he could skip into the neighbouring country.

His wife's dead body was discovered by relatives five days after he murdered her.

There was suspecting ritualistic tendencies because her eyes and heart were missing while her stomach was also cut open and the fetus removed.

A relative said: "She was killed on Sunday and we only discovered her on Friday morning." The deceased left behind a 3-year-old child .

See the graphic photos in the links after the cut below...

If you have guts, click the links below to view the gory photos...