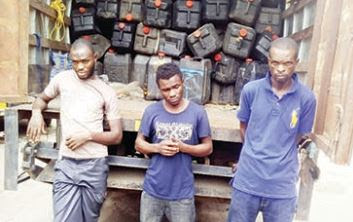 A 30 year old suspected member of a syndicate vandalising pipelines of Nigerian National Petroleum Corporation, NNPC, Jamiu Ajani, said yesterday he did not know selling petrol obtained from vandalized pipelines was a crime.The syndicate was intercepted by the task force at Owode area of Ikorodu in a Chevrolet truck, while transporting the stolen products to buyers in various parts of Lagos State.

Ajani was arrested alongside his accomplices, Demola Lawrence and Raymond, by operatives of the Inspector General of Police Special Task Force on Pipeline Vandalism, which recovered 300 units of 50-litre jerry cans loaded with premium motor spirit, PMS, from them.
Ajani said:

“I used to sell building materials at Ketu before venturing into this business. It was some of my customers from Ikorodu that got me into the business.I discovered that they were making more money than I. So I begged them to show me the way. They said I could not go into the creeks because I do not know how to swim, but I could always buy and sell the products to people who need it.

“My boy, Damilola, the driver of the truck we were using and I were intercepted by police on our way to supply the products to a buyer. I did not know selling petrol from vandalised pipelines was a crime.”