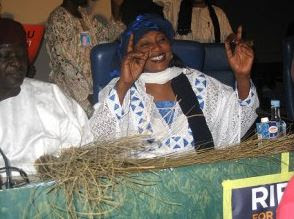 Hajiya Najatu Mohammed, a prominent All Progressives Congress (APC) politician from Kano state and close political associate of President Muhammadu Buhari, in an interview granted to Newsdiaryonline, has expressed her fears that some forces are seeking to scuttle the commendable anti-corruption moves of the president.

Najatu said that even as Buhari was inaugurated as the leader of the nation there were already worrying indications from those seeking to undermine the rule of law.

Speaking on the steps President Buhari has taken so far, the APC chieftain said:

“My take is that he is being strategic. Those who are advocating that he should be fast about the way he is doing things, that he should take the fast track just know what is happening.

“They know that if he continues (with) investigations in the various ministries, theirs is finished. They have interest in this corruption and a lot of them are beneficiaries of corruption.

“It took Obasanjo over two months to (announce) his ministers. I don’t know what the big deal is. And the one that went very fast, President Jonathan, where did he land the country? He was so fast in appointment. He was so fast in dismissal. So we don’t want President Buhari to be fast, let him take his time.With or without ministers, he is working and we have found sanity in our country.The tension is gone.Our foreign reserve is rising.So what else do we need?There is a lot of peace in the country.We are all sane now.People are no longer tensed (up).We have less fear about being bombed, being assassinated, being kidnapped, we have less fear of that.”

However, she further stated that there is tension in the camp of corrupt people.

Najatu said: “It’s the same kind of trend. But what they don’t know is that they don’t know how far Nigerians have gone. And I want to zero it and attach it to what (Governor Ayodele) Fayose has said on several occasions. He has come out to say, I mean the current governor of Ekiti; he has come out to say on quite a few occasions that if you vote Buhari, he is going to die anyway! He is going to die like Abacha died in office, like Murtala died in office, like (Umaru)Yar’Adua died in office. Now look at these three people, they are all northerners and they were all assassinated. So if you link it up with this move that has happened before,we are saying no to it.”

“There are very, very strong reasons to believe that they just finished him up and he didn’t die in office. He had a terminal illness; there is no doubt about that. But quite a few people know including his doctors that that they expedited his death through poisoning. So if that is it, in fact, why should Fayose include Yar Adua, if they know truly and honestly that he just died of natural causes. Because they were all assassinated. Murtala was assassinate, Abacha was assassinated.”

The politician expressed fears that Buhari will be killed: “My fear is that having heard what Fayose said, having seen the trend that this so-called peace committee is taking, trying to propagate against the government of Muhammadu Buhari. I fear that they might try to assassinate him and give excuses, because already the cat has been out of the sack from what Fayose has said. And looking at history and the trend, the cat is out of the sack. So let me tell them and we are telling them in no uncertain terms that is no longer acceptable. No one will ever hold Nigeria to ransom again. We’ll hold them responsible.”

She also claimed that when Diezani was being investigated by the National Assembly under Tambuwal, Sultan Saad Abubakar of Sokoto called Tambuwal and warned him against investigating Diezani.

“There is no reason for her to go to the Sultan in the first place. She has no business going to kneel before the Sultan. And then Oritsejafor has over and over again accused Muslims of killing Christians.Was he helping the peace? And when Muslims were being massacre, he never uttered a word. So what he was doing was to divide and to rule. So who cares about Oritsejafor and whose interest was he protecting. His personal interest and the interest of the president who had given him so much. That was President Jonathan. And then who is next. Who are those in the Committee,” Najatu said.