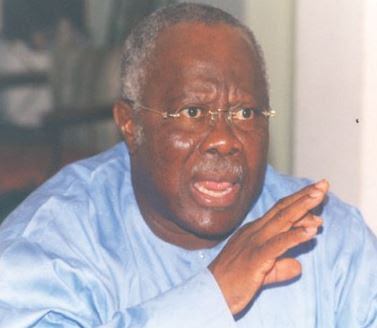 A former National Deputy Chairman of the Peoples Democratic Party, Chief Bode George, has asked President Muhammadu Buhari to take his anti-corruption war to the next level by probing the last two governors of Lagos State, Asiwaju Bola Tinubu and Mr. Babatunde Fashola (SAN).
George said in a statement that it would be wrong of Buhari to claim to be spearheading an anti-graft campaign and at the same time be considering Fashola for appointment in the light of the N78.3m of taxpayers’ money Fashola spent on a personal website, www.tundefashola.com.

He said Fashola’s excuse for spending N78.3m on a website was disgusting and should be rejected.He said, “We are living in a very interesting time. There is an air of repugnancy everywhere most especifically in my state where the immoral stench and the dark odium of Mr. Babatunde Fashola’s administration is daily being unearthed.

“What is most disgusting and annoying in all these is the arrogant and the befuddled attempt of Mr. Fashola to justify the apparent reckless misappropriation of Lagos state taxpayers’ money to set up a personal web site.

“Fashola shows no remorse, no semblance of regret, no guilty nudging of conscience. Instead, he still attempts to ride a high horse, puffing and stomping in feigned seraphic innocence. We are not fooled.”

George said many of the projects undertaken by the Fashola were done at exorbitant prices.

The PDP chieftain wondered how the 1.6km Lekki-Ikoyi Link Bridge could cost N29bn.

He added, “We knew all along that the emperor had no clothes. Using N78m of taxpayers’ money to build a website is reckless misappropriation. The phony over N29bn used to build a mere kilometre long link bridge is outrageous venality.

“The spurious N1.5bn allegedly spent on phantom pedestrian bridges is another con game. And there are so many of these screaming illegalities observable in the record of our poster boy of yesterday!”

George said in a sane clime, Fashola would be facing comprehensive investigations rather than being considered for any appointment in the light of the over N419bn debt incurred by the Fashola government.

He said the All Progressives Congress-led Federal Government would do well to start implementing its promise of change from within.

George said, “In a more just society, Mr. Fashola should be facing a comprehensive investigation rather than being considered for any appointment at all. President Buhari should use the Fashola case as an acid test of sparing no one with any intimation of public malfeasance.

“Rather than engaging in a smug chest beating of innocence, Mr. Fashola should first remove himself from any consideration of public appointment and openly call for a judicial probe of his eight years in office.

“Nothing else will bring out the true picture. Lagos State is now the biggest debtor in the federation with over a trillion naira in bad debts. It may take at least 40 years before Fashola’s indebtedness can be defrayed! What a malady!”

George said there was no way Fashola would be probed without probing Tinubu because one was the creation of the other.

He said, “In the end there is no way to divorce Fashola from Bola Tinubu. They are both linked in unutterable complicity. If Fashola stands today in tarnished allegations, Tinubu, his godfather, cannot possibly distance himself in innocent escapism.

“If Fashola now rots in the mud, we must look through the depths to understand the instigating and factor. Whenever Fashola is cooling his feet at the interrogation centre, Tinubu should not be far behind.”

All attempts to get Tinubu’s reactions proved abortive as calls put through to his media aide, Mr. Sunday Dare, were not responded to.