Shock as robbery suspects escape from Police cell in Lagos(Photos) 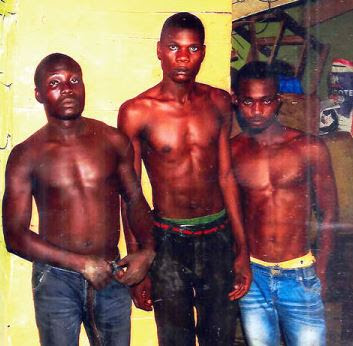 Two of the robbery suspects, who were arrested while they were operating on Iju Road, in the Agege area of Lagos, have escaped from the police cell.

The three suspected members of the gang, which reportedly laid siege to a hotel and some residences of Sands Avenue, off Iju Road, had been handed over to the Pen Cinema Police Division, before two of them escaped from the cell.

It was gathered that policemen, who were on duty on the fateful day, had been arrested, while the fleeing suspects had yet to be re-arrested.

Our correspondent learnt that on Sunday, August 9, at about 2am, the armed robbers, said to be about 10 men, invaded the area, and robbed a hotel and some private homes.It was learnt that the robbers carted away money and valuables from the hotel lodgers, workers, and other places during the operation.

PUNCH Metro gathered that men of the Oodua Peoples’ Congress, who were the local vigilance group in the area, however, apprehended three of the robbers and took them to the Pen Cinema Police Division.

Our correspondent learnt that the three robbery suspects, identified as Dare Drain, Akeem AK, and Lekan Student, were locked up in the cell by the policemen on duty.

It was gathered that on Wednesday evening, two of the suspects had, however, cut through the burglar bars in the cell, and escaped from custody.

Victims of the robbery and the OPC men, who were aggrieved by the development, were said to have been invited by a policemen in the station, who pacified them that the robbers would be re-arrested.

When PUNCH Metro visited Sands Avenue on Tuesday, the manager of the hotel, which was robbed, declined to give any comment.

However, one of the workers, who spoke on condition of anonymity, said the robbers carted away a huge amount of money and also injured the hotel’s guard.

He added that the robbers raped some of the hotel’s female workers, who had yet to resume work.

“The robbery lasted for more than an hour. We were helpless. The robbers overpowered our security guard and injured him.

“They carted away valuables. They raped some of our female workers during the operation. I was told that the OPC men later caught three of them and took them to the police station.”

The OPC coordinator in the area, who did not want his name in print, said they were taken aback when the police in the Pen Cinema station told them that two of the suspects escaped from the cell.

He added that the suspects, who had yet to be re-arrested, raped some of their victims during the operation, including a 13-year-old.

“The security man at the hotel, who is our member, recognised one of the robbers and led us to his place, where he was arrested. The man confessed to taking part in the operation. His name is Dare Drain, and he was caught in the Idi-Agbon area of Ifako.

“He was the one who took the OPC men to arrest the other two. The three that were caught on Sunday were taken to the police station.

“It was on Wednesday that information got to us that Drain and Akeem have escaped from the cell. We were shocked at the development. The DPO then invited us, and pleaded with us to assist the police with information to re-arrest them, adding that the policemen on duty had been detained.

“But as we speak, we have not got them. What the police told us was that the robbers cut the burglar bars, and escaped from the cell. The robbers, apart from carting away money, also raped their victims.

“The robbers were led by Dare Drain, he and his boys had earlier come to Tarkwa Crescent, before the Sands Avenue incident.”