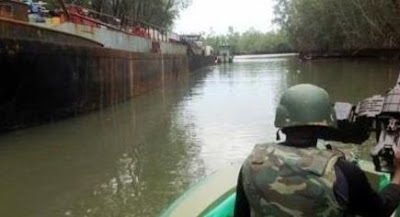 The Joint Task Force (JTF) in the Niger Delta, Operation Pulo Shield, has arrested 21 suspected oil thieves, among whom are some known big boys, and destroyed oil bunkering sites in multiple raids.

This was revealed by Lt.-Col. Ado Isa, Media Coordinator of JTF, in Yenagoa, Bayelsa State. He said the raids were conducted within 10 days.

He said that the truck loaded with 16 plastic tanks of 1500 litres capacity was siphoning illegally refined Automotive Gas Oil (AGO) at the time of arrest.

The JTF spokesman said the products estimated to be about 24,000 litres were suspected to have been illegally siphoned from the NNPC pipeline.

He added that some of the vandals fled prior to the arrival of the troops while the truck was in the custody of the JTF for further investigation.

He said some of the arrested were made at Ughelli-Warri and Orerokpe Community in Okpe and Ughelli North Local Government Areas of Delta.