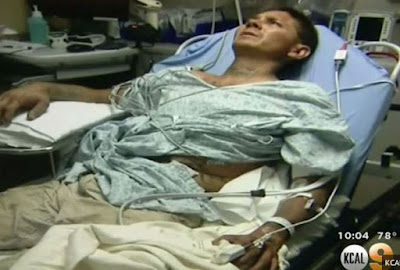 According to UK Mirror


A "foolish" man who picked up a rattlesnake to pose for a photograph with it faces losing his hand after being bittten.


Alex Gomez, 36, said he came across the 4ft-long venomous snake behind his house in Lake Elsinore, California.

He picked up the slitherer and posed for pictures, taken by somebody else.

Judging by one image, he even wrapped the snake around his neck.

However, after the photographs were taken, the rattlesnake, unsurprisingly, bit Alex's hand, injecting him with venom.

Speaking to news outlet KTLA, he said he ran to a neighbour's house and asked them to call an ambulance.

Alex was airlifted to Loma Linda Hospital immediately after the incident on Monday last week and was discharged three days later.

There is still a possibility he could lose his hand.

His mother, Debra Gomez, released the photographs to "teach him a lesson".

She told KTLA: “I was terrified and I said ‘what a fool, stupid, you could die.'”

If the rattlesnake had bitten Alex's neck, he could have died.