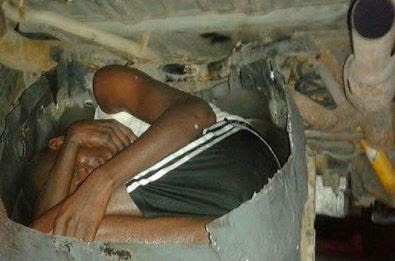 This tragic scene shows a desperate young illegal immigrant who nearly died after curling up inside a lorry’s spare Wheel. The determined teenage stowaway hid inside half of a spare wheel in the false bottom of the vehicle.

Spanish police said the young man could have suffocated because of the lack of air in the cramped space, petrol fumes and the scorching heatwave where temperatures have hit 40 degrees.He was found by customs officers at Aduana de Beni-Enzar in Melilla where thousands of immigrants are trying to get across the border.One boy was recently discovered hidden in a suitcase whilst others have unbelievably climbed into car engines or hidden under lorry axles. The stowaway pictured above was however not alone. Officers found two other immigrants in the same vehicle, both hidden in cramped spaces in a hidden compartment under the floor of the lorry.
They are all of Sub-Saharan Africa nationality aged between 18 and 25. All three had to be given first-aid at the scene as officers feared they could die.

Police said the teenager hidden in the half wheel could hardly breathe and was unable to stand up. The lorry driver, a 39-year-old Spanish man, was later arrested for an offence against the rights of foreign citizens.