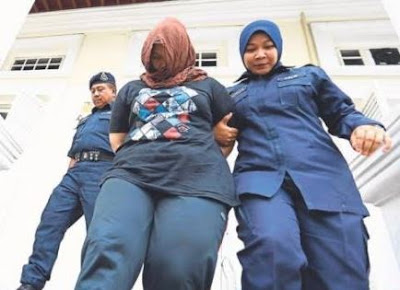 30- year-old Chonmanee Laphathanawat from Thai province of Rayong was yesterday August 27th sentenced to death by a High Court after finding her guilty of trafficking in 689.10gm of cocaine in 70 capsules hidden in her anus and her private parts.

Laphathanawat, who was detained at the Penang International Airport in Bayan Lepas in February 2013, looked calm but dejected when Judicial Commissioner Nordin Hassan pronounced the verdict. She was charged with committing the offence from about 12.50am on Feb 13 to Feb 16, 2013 at the Penang General Hospital.

Her court-assigned defence counsel, K Thangeswaran told the court she was unaware the capsules contained cocaine, thinking they contained gems. She said she was forced by some people to swallow the capsules in Brazil with other capsules forcibly inserted into her private parts. It was argued that she had not felt well and was asleep throughout her journey from Brazil to Malaysia via Barcelona, Spain and Singapore.

Chonmanee said she sought help from Penang airport police when she could no longer bear the pain in her abdomen. Deputy public prosecutor Amir Hamdzah Othman said Chonmanee failed to produce any witnesses or evidence to substantiate her claims. Mr Nordin said the defence had failed to prove the case beyond reasonable doubt. He said Chonmanee failed to inform authorities in Barcelona or Singapore before her flight to Penang about her plight.

"She could also have checked the contents of the capsules in her private parts. Her ‘wilful blindness’ did not help her defence. I am satisfied that the prosecution has proven a prima facie case against her."