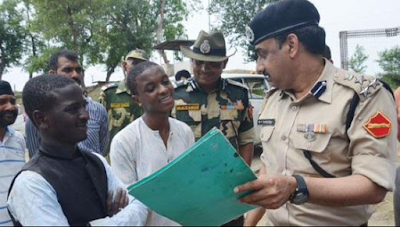 Two young Nigerian men, Imran Kabeer 24 and Sani Jamiliu 25, both from Kano state, were arrested today August 7th in India as they made their way allegedly to join the Islamic State (ISIS) in Iraq

According to reports, the young men were arrested at the India-Pakistan border as they made to scale a barbed wire fence. When interrogated by India's Border Security Force officials, Imran and Sani said they were on their way to Pakistan and then to Iraq to join ISIS but when searched, they had no valid travel documents to enter Pakistan but it was found that they had entered India on August 6th.

'AD'
They made their way from Amritsar city to Delhi and arrived at the integrated check point at Attari on Friday morning.

“On finding the border gates closed, the youths moved towards a barbed wire fence along the Attari-Wagah rail track (on which the Samjhauta Express peace train between both countries plies) and jumped over the high barbed wire fence, thinking they had entered Pakistan. BSF personnel immediately nabbed them,” a BSF official said.