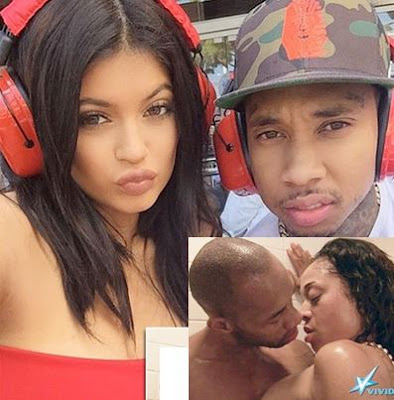 Yesterday, we reported it here that the Kardashian star who turned 18 few days ago, Kylie Jenner is reportedly being offered $10 million to film a raunchy sex tape, and her boyfriend, Tyga is all and ready for it. In fact, HollywoodLife.com is exclusively revealing that Tyga wants it to be bigger and wilder than that of Love & Hip Hop: Atlanta stars, Mimi Faust and Nikko Smith’s racy video.

25-year old Tyga, loves to make his girlfriend, Kylie feel extremely special, so if they take the $10 million offer to make their own sex tape, he’s not doing anything ordinary and is ready to take it to the next level — and according to an insider, that includes private jets and a bed of money!

“Tyga would knock Kylie out of the park in this sex tape and it would be wilder than Mimi and Nikko’s. Sure, that shower scene was cool but Tyga’s got bigger ideas than that. He’s talking about getting it started in the back of the Rolls. Then he wants to continue it, making Kylie a member of the mile high club and get down, in flight, on the G-5!

And instead of using that pull out bed on the G5, he’d make a mattress using a half of million dollars in $100 bills. That’s the type of high-status tape Tyga’s talking about. This wouldn’t be an average shower or bedroom scene.”

Wow!!! that sounds like the most lavish sex tape imaginable. Although the Tyga/Kylie sex tape is still just a potential thing, there’s one person who definitely doesn’t want it to happen, Kim Kardashian! Another insider says that Kim “doesn’t want to be outdone,” and actually thinks a sex tape would “catapult Kylie into a different stratosphere of fame,” which she doesn’t want! Jealous much?

A new report discloses that even though Tyga is prepared for the epic sex tape, he wants more than $10 Million for the hot tape with Kylie Jenner. An inside source tells HollywoodLife.com;

"Tyga enjoys making love to Kylie now that she’s 18. That’s his girl and she’s everything to him. He understands that the industry wants to see them get down and dirty in one big explosive sex tape. He’s down to do that, but he wants more than $10 million.

For Tyga to do this, he’s looking for some serious meal tickets and knows he and Kylie can command way more than $10 million. He thinks that offer should be doubled for how he’s willing to get down on film.

Kylie loves being a woman….she never thought she’d feel this sexy. But now she feels like a sex goddess. She says she feels better naked than she does with clothes on. She gives Tyga credit for helping her with her body confidence.

She says he brings out the sexy side of her. She’s never been big on working out, but she jokes that she and Tyga love to sexercise. She brags that she burns 10 thousand calories a day in the bedroom with him.”

With or without a sex tape, it sounds like Tyga has some crazy things in store for his lady. I can't wait to watch the surprises unfolds...especially the epic sex tape!