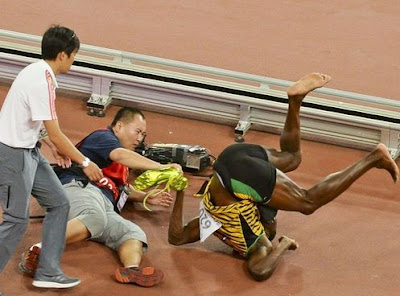 Usain Bolt ran his best 200m time in two years, cruising to a gold medal in the final at the IAAF World Championships in Beijing.

The 29-year-old Jamaican posted a time of 19.56 seconds, easily beating American Justin Gatlin, who finished second with a 19.74. Bolt edged Gatlinby one hundredth of a second to win gold in Sunday’s 100m final.

The win is Bolt’s 10th overall world title. He has won four gold medals in the 100m sprint, three in the 200m race, and three more in the 4x100m relay at the World Championships, dating back to 2009.


The only person, it seems, who can bring Bolt down is this cameraman on a Segway.

From his celebratory lap after the race:

Bolt had some fun with the moment in the post-race news conference.

“The rumor I’m trying to start right now is that Justin Gatlin paid him off,” Bolt said, according to The Associated Press.

“I want my money back,” Gatlin joked. “He didn’t complete the job.”