We Rape Our Victims Before Killing Them – Robbery Suspects 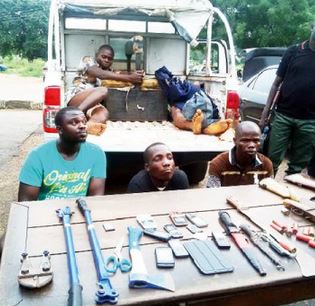 Six armed robbers, who specialised in raping and killing their victims were on Thursday arrested by the Oyo State Police Command in Ogbomoso after they were traced through a mobile telephone they stole from one of their victims.Commissioner of Police in the state, Mohammed Katsina, said while parading the robbers that one of them died during a gun duel with the police while another was seriously injured.

Until their arrest, the robbers were said to be living in different cities and only came together when they wanted to go for operations. Katsina said investigation took his men to Ijebu-Ode, Ibadan, Ogbomoso and Oyo where the robbers were picked up.

Katsina explained that, “The group had been terrorising Oyo and Ogbomoso for a long time. On one occasion, they robbed a house and gang-raped two women. While escaping with their loot after an operation on May, 28, 2015, they shot a passer-by. The gunshot alerted my men and they acted quickly. Further investigation led us to Ijebu-Ode where the leader of the gang was caught.

“His wife was in possession of the mobile telephone that led us to him. He cooperated with us and led us to other gang members. In their hide out in Ogbomoso, they opened fire on the police, leading to a gun duel. At the end, two of them were injured and one died in hospital. We must thank the public for their cooperation and appeal to them to volunteer information when they notice unusual movement of bad people in their community.”

A prominent member of the gang, Fatai Balogun(28), who was traced to Ijebu-Ode, alleged that the member that was killed during the gun battle with the police raped and killed their victims.

He said, “I live in Ibiade in Ijebu Waterside and I sold fairly used imported clothes in Ijebu-Ode before I joined the robbery gang about a year ago. I was introduced to the gang by Jankaa who was killed in an operation in Mile 12 area of Lagos State. I have participated in seven robbery operations in Ogbomoso and Oyo town.

“I have never raped any of our female victims. One of us, Segun, was fond of raping our victims. He was the one that was killed when police came to arrest us. When we robbed a Ghanaian sometimes ago, we also killed his wife. Segun said that the woman knew him so he shot her.”

Balogun added that the gang started by stealing petty valuables before stealing a gun with which they began armed robbery operation, raping and killing.

“We started by stealing mobile telephones and small valuables after cutting window nets to gain access. But one day, we were coming from an operation when we saw a night guard sleeping. We stole his double barrel gun.

“The last operation was done in Oyo where we stole money, mobile telephones and computers in a house. The phone was used to track us. I was in Ijebu when the police came to my house, I knew there was no way out so I cooperated with them,” he added.

One of the victims, who was raped in their last operation, said they entered through the window and forcibly took money from her husband who is a car dealer.

“They later came to my room and took money from me after beating me. One of them also raped me. My husband alerted the police but they escaped,” she said.