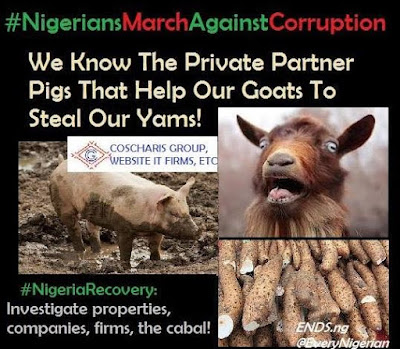 During the Jonathan years, things in Nigeria were really so bad and desperate from the top that other violations at senate and state level were often overlooked or easily absorbed. Billions were being looted, thousands were dying. It was not so easy to focus for long on the atrocities of many other public officials. However it is obvious that as Nigeria repaired the head, proper scrutiny has been restored cross board and we see the Senate, several governors and other civil servants being finally held to account. Nigerians had held our breath and rallied together, ignoring contact with goats and pigs to get Jonathan and company out of Aso rock.
In August of 2009, Leadership reported that Governor Fashola of Lagos deported 160 destitutes, men, women and children with various disabilities to Kaduna. Enduring indescribable hardship the 160 were dumped on Kaduna-Abuja expressway.

In August of 2013, either 14 or 70 Igbo destitutes were deported from Lagos and dumped once again on the outskirts of Anambra state. There had been an earlier similar dumping of Igbos in 2012.

In December of 2014, SaharaReporters gathered that another 70 destitutes were carted out of Lagos and dumped this time on the outskirts of Kano. These were indigenes of Niger, Kaduna, Kebbi, Jigawa Zamfara and Sokoto states. It is puzzling why they were all dumped at the door of Kano state and if and how they were expected to relocate to their states or if Kano was supposed to be a happy receptacle for the Lagos rejects.

Over 3000 Nigerians have been deported from Lagos since 2009 with many dumped in Ogun and Oyo states. Deportations of destitutes and the disabled are usually not by identity with mixed state indigenes being dumped at any suitable state outskirt.

These findings are troubling.

The attitude of governor Raji Fashola is not only illegal and unconstitutional, it is repulsive, draconian, ungodly and grossly inhumane.

I can only compare the class and elitist audacity and degree of oppression of such behavior to Nazi Hitler. The behavior of Lagos state is like locking people in concentration camps, feeling you are pure blood and they are scum. Providing homes and welfare for these downtrodden was not an option for the Lagos state government; it had better things and official's personal websites to build and upgrade with its money. They were to be deported and dumped!

According to section 41(1) of the 1999 constitution “every citizen of Nigeria is entitled to move freely and to reside in any part thereof...”

When publicly pressured to apologize for the 2013 Igbo incident, Governor Fashola refused. Tongue in cheek he scolded the Igbos for "not developing their states."

A straight back indignant governor Fashola said,“I apologize if my (deportation) actions were misunderstood... But I think the basic issue Aka Ikenga must address is why people feel compelled to immigrate from one part of the country to the other? Is it the case that some lack the resources to develop or perhaps some parts are endowed with enormous resources but not adequately managed? How can development be so difficult from the zone that has produced people like Nnamdi Azikiwe, Alex Ekwueme, Ike Nwachukwu, among others? As political storm gathers, there are contact spots but like in football, contact spots have rules. Those who are victims of our shortcomings as professionals in and out of government should not be pounced. A day like these calls for deep reflection about issues of our loyalties. Are we more Igbo than Nigeria or we are more Nigeria than Igbo?”

Compared to the policies of Fashola's Lagos, several states including Sokoto gave indigenship to state foreigners who had resided in the state for a few years. Such residents would be permitted to contest for state political office.

How did Lagos get away with these grave atrocities? Here again we blame 16 years of PDP, the leadership vacuum in Aso rock and an inebriated and colossally bloated Senate, hungover on billions of naira they in no way merit.

While some say Fashola did so and so good (usually in projects for the affluent), what they fail to understand is that it is not the good done but the bad done that warrants retribution. A public official swears to uphold the constitution. Jonathan handing over as Kukah eulogized is his job, his constitutional obligation. Looting billions is not. As a medical doctor, I am not forgiven when I amputate one wrong leg simply because I had fixed 1000. For the "good" they do, which I simply regard as them doing their job, Nigerian officials in particular are actually over compensated (monetarily).

As President Buhari and Attorney Osinbajo, SAN, execute their "no looter left behind" program, ensuring the robbers of the past years, ala goats and their co-conspirator, Coscharis, website IT firm, Africapitalistic cabal and other private partner pigs are properly rewarded for their indulgence, we must demand that several other violations of Nigerians are investigated and perpetrators are reprimanded. State sponsors of terror, administrators who have been flagrantly abusive of power, etc must all be held to account for terrorizing and killing Nigerians. The process of sanitization has obviously just begun.