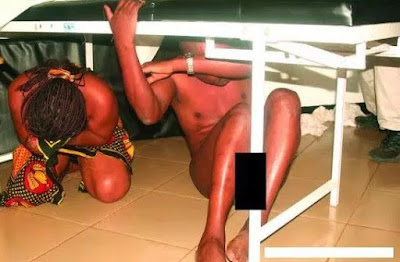 A 42-year-old woman, Mrs. Doris Oseni, has told a Customary Court in Ondo town, Ondo State, that she caught her husband of 12 years, Prophet Femi Oseni, on the floor of the church office, having sex with another woman.

The woman, who is also an evangelist in the church, therefore asked the court for the dissolution of their marriage on the grounds of adultery, desertion and lack of love on the part of the husband.
The plaintiff said her husband’s behaviour towards her changed after seven years of their marriage with no child, adding that the defendant had been sleeping around with different women, most of whom were their church members.


She said, “Recently, after several days of abandoning me, I traced my husband to his church in a village not far from Ondo town. On getting there, I met him on the floor of the church office with one of the women in the church. They were having sex.”

She said she reported her husband’s strange behaviour to his mother, adding that it did not stop him from the adulterous acts.

She stated that she was fed up with the relationship, praying the court to separate them.

Doris also accused the husband of having a child, who she said was a product of his extra-marital affairs .

However, the 45-year-old Oseni pleaded with the court not to dissolve the marriage with his wife, saying he still loved the woman, whom he described as a virtuous woman that had been taking care of him since he married her.

In his ruling, the President of the court, Joshua Adunbi, said the words and body language of the wife had shown that she was tired of the union. He therefore ordered the dissolution of the marriage .

Adunbi added that both parties were free to re-marry any person of their choice and ordered the petitioner to pay the sum of N2,500 to the respondent as a refund of dowry.

He said anyone of the parties that was not satisfied with the decision of the court could appeal the ruling within 30 days.