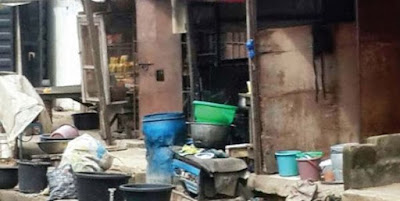 The little girl was found dead by her parents after she was seen dangling from the ceiling of her parents’ one-room apartment in Mushin.

According to Sunday Sun, a neigbour said:

“I have never seen anything like it before. Yes, I have heard of adults committing suicide but never have I seen or heard of a 12-year old girl taking her own life. I think it is as a result of some sort of spiritual manipulation.”
Expressing pain over the death of Mulikat, another neighbour de­scribed the deceased as a very decent and responsible girl.

“She was a very good, responsible and respectful girl. It remains a big surprise to me why she would choose to commit suicide. That morning, before her mother went to work, they both passed by my shop and I admired the fine hijab that she (Mulikat) wore, and I told her mother I liked it and she smiled.”

“When her mother came back from work, she met her other children playing outside the compound and asked after Mulikat. They told her that she was in the house. On getting to the room, she met the door locked from inside and began to knock, thinking that she was asleep.

After banging on the door for some time and calling her name, Mama Mulikat became so worried that she had to scream for help. When we got there, we knocked for a while, still there was no response from inside. So, we broke down the door. The sight was gory.

Mulikat had tied a rope to the ceiling fan of the room and hung herself. Her body was dan­gling. I feel she had been hanging there for hours since the saliva from her mouth was almost dried up,”he narrated.

According to reports, around 4pm, Mulikat had asked her young­er siblings to leave the room, claiming that she wanted to clean it. One of her siblings reportedly said she literally dragged him out of the room when he was reluctant to leave, and locked the door on herself. He said he tried going back inside after some time, knocked but his sister refused to open the door.

No one could tell for sure what lead to her suicide but some speculated that the deceased may have been frustrated following sexual advances made towards her by an unidentified neighbour. Suspicion has it that the man might have raped the girl who had always rejected his advances.

“There is a man in our compound who has been making advances to the young girl. She had complained several times and the issue had caused arguments between Mulikat’s parents and the man many times. I suspect that the man might have raped her and maybe due to the frustration, she committed suicide,” a source disclosed.

The police have since arrested 8 suspects in connection with the little girl's death.