3 Gay Men Caught in the Act in a Bush [PHOTOS] 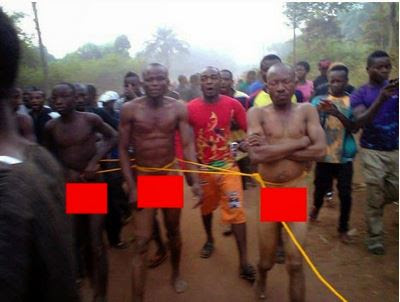 Some things are not just African and will never be! The three men  pictured above whose names could not be established immediately, were busted red-handed doing it in the bush. The villagers who gathered to witness this drama were shocked that this kind of taboo was happening in the village where most people reserve their culture. The three men received a thorough beating from angry mob and village vigilante youths who later forced them to act live or to demonstrate whatever they were doing in the bush.

Luckily the police arrived on time to save them before they could be lynched. Some people said that this event is unusual powers of darkness that may have possessed the victims, currently they are held at the police station awaiting for the next cause of action and at the same time keeping them safe from perturbed villagers.