7 journalists freed by snake after Ogun judge ordered their detention 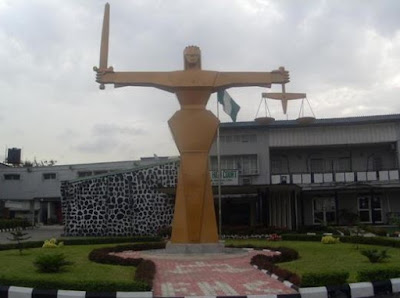 Seven journalists who were arrested in Ogun were released three hours later, thanks to a snake ..at the court premises today.

The detained journalists were in the High Court 1, Ota court premises by 11:40 am to make an inquiry in respect of two matters – cases involving victims of Pakoto demolition and killing in Oke – Ore community, which were believed to have been listed for hearing today at the Ota arm of the Ogun state Judiciary.

According to PM News,the reporters,upon alighting from their vehicles at the car park were accosted by a Police orderly who identified himself as Adeyemi Oluwaseun.
When he got to know that they were pressmen, he left them and moved back to his duty post.

Few minutes after,a woman later identified to be the Assistant Court Registrar (ACR) approached the journalists and demanded to see a letter of authority from either the Chief Judge or a Senior judiciary officer permitting them to enter the court premises.

Unconvinced they were journalists in the court to carry out their constitutional duty, she dashed to the judge while the court was in session and when she emerged, she said the judge had ordered their arrest after she misinformed him that they were filming the entire court premises.

For three hours from 11:45am to 2:44 pm, the reporters were detained inside the administrative wing of the court.

But a poisonous snake that emerged from the bushy premises and which bit one of the male judiciary staff, triggering a pandemonium , forced the judge to send the journalists away after reprimanding them.

The judge said following the prevailing emergency, the Assistant Court Registrar had to see to the welfare of the staff.

Some of the staff rushed the victim to the state hospital in Ota for treatment, others stayed behind to hunt for the snake which slipped into one of the crevices at the staircase leading to the entrance of the ACR office.

Before freeing the journalists by 2:44pm, after they were brought into his office,the angry judge Justice N.I. Agbelu,lambasted them,warning them to be wary of mixing court with a public place.

The tongue-lashing lasted for almost 25 minutes as he said,

“I put you under arrest, you are under arrest. You will discover that this compound is fenced round, is that not so?

“It is not on the major road that you can just come in. If you are representing the public interest, you must know we have a Head in this court. I am a judge, I have an unlimited jurisdiction in the state.

“I can even say somebody should be arrested without question, but in exercising my power, I have to inquire into many things.

“You cant say because you are representing public interest, you cannot just burst into any compound or burst into my house. You have a right as a journalist, but, where your own stops, my own starts.

“And if I am the owner of a house, I have a right to my privacy, fundamental right to privacy, because I want to educate you. If you want to infringe on my right that is where your own right stops which I am entitled to.

“What I am saying is that judiciary has its own right too. You are infringing on our own right. You don’t know? A report came to me that some people invaded the court claiming that they are journalists filming the whole place.

“It is not a local market and it is not an open market. You are approaching the court. If you are interested in a particular matter in a company, will you just burst into the company, saying you are journalists?