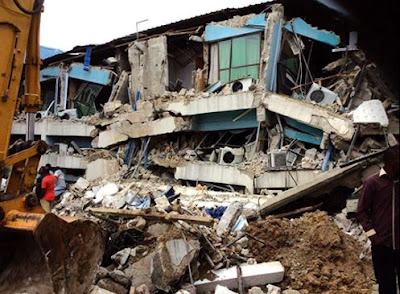 Seven persons, including a woman police officer and an aide to the wife of a northern governor, were among the injured when the popular Markaival Hotel, on Refinery Road in Effurun, Uvwie Local Government Area of Delta State, collapsed yesterday.

It was learnt that the hotel collapsed the way Synagogue of All Nations Church in Okota, a Lagos suburb, crashed in 2014.

The victims were mostly indigenes of other states who were in the town for a programme at the Christ Mercy Land Church, headed by Pastor Jeremiah Fufeyin, popularly called the Ijaw T.B. Joshua among his followers.
Our correspondent’s checks revealed that the victims of the collapse were mainly religious pilgrims from outside of Delta State.

The aide to the wife of a northern governor, simply identified as Adeza, told Otuaro that she left Abuja on Tuesday afternoon in search of a solution to some family problems.

“I am a Muslim, but I came here to see the man of God. Recently, I lost my elder brother, who was in the Army. So many things have been happening in my family. So, I came here for prayers.”

The lady, who occupied Room 206 before the incident, said heard some voices from under the rubbles when she was rescued.She hinted that more people could still be trapped underground.

But the hotel management said the seven lodgers in its record were rescued at 11am yesterday.

Another victim, who simply identified herself as Evangelist Florence, told our reporter that she came from Yenagoa, the Bayelsa State capital, for the church programme.

“Immediately I got into town, I went to the mountain for prayers. It was after the prayer that I came to the hotel.

“As I was sleeping at 2am, I heard a sound like krakrakra (creaking sound) and everything came down. I tried to unlock my door but I couldn’t; it seemed like the door was locked from outside. I was under the ground till about 7am when I was rescue.”

A landlord in the neighbourhood, Akpoguma Davis, said he was woken up by the barking of his dogs.

He said: “At 3am my dogs were barking seriously. So, I came out, not knowing they were reacting to the noisy cracks from the first vibration.

“I took a torchlight and went round, wondering if there were robbers lurking. After three minutes, this whole wing of the building collapsed.

“About seven persons have been rescued alive. I heard one woman shouting: ‘I am Mercy; help me.’ We got her out after four hours.”

Another neighbour, Ayo Ameye, told our reporter that he and others were certain that there were more people under the rubbles because they were hearing calls for help from beneath the collapsed structure. Ameye said:

“More persons could still be in there. A man on the other side has been in contact on his phone. The phone probably ran out on battery because we have not been hearing from him anymore. The line has gone dead.”

One of the rescued victims, Benjamin Hosu, said he arrived in Warri from Lagos on Tuesday.

“A colleague and I came to town to execute a project yesterday. We were lodged on the first floor. Around 3.10am, we heard a noise and thought they were robbers.
“Suddenly, our room went down to the floor. Some rescuers came out with torchlights as we shouted for help. They started breaking in till they got us out. We have been to the hospital, checked and confirmed okay.”