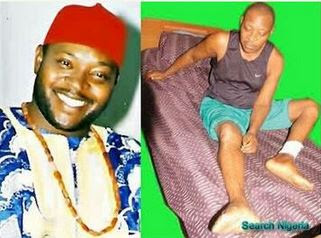 Popular Nollywood actor, Prince James Uche is dying from a heart and kidney disease which he has been battling with since the year 2007. The ailment has kept him off acting for a very long while.

A former Vice President of the Actors Guild of Nigeria and seasoned actor, Uche is still struggling to survive a strange illness that has heavily drained his finances.

To make matters worse, Uche’s landlord has just served him a notice, ordering him to quit his residence at 45, Yetunde Brown Street, Gbagada, Lagos.The ailing actor, who now spends most of his time in the premises of a Catholic church near his residence. He granted an interview to a news reporter of recent and he seized the opportunity to narrate his ordeal.

“All I can remember is that something struck me on the left side of my face about eight years ago, when I was heading for the burial ceremony of Pete Edochie’s mother at Nteje in Anambra State. I had no idea what hit me in the face, but it happened when I arrived at the junction leading to the town. I got to the venue of the ceremony and stayed in the town for two days. 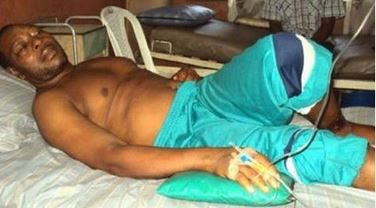 "On the third day, I suddenly found that I could no longer move my body freely. Although I barely managed to get upon my feet, I could not climb up the staircase.“I had to wait till the following Sunday before deciding to leave for Lagos. But my friend, Edochie, persuaded me to follow him to Enugu where he lived at the time.

"I slept in Enugu on that day. In the morning I went for treatment in a hospital.“After the doctor had finished examining me, he stared at me with his mouth half open in shock for a long time. When I asked what was wrong, he said I should have been dead. He took my pulse again and then, sweating, said my blood pressure was abnormally high. He said it had risen up to 300 and it was a miracle that I was still alive.”The doctor also told the actor that, judging by his blood pressure, he should have been dead or paralysed."

That was how Uche initially discovered that he had a heart problem. Although the doctor in the Enugu hospital prescribed a certain drug for his illness and instructed to take it for the rest of his life, Uche had thought it was nothing to worry about and he hoped to recover quickly. Unfortunately, eight years after, the actor, whose career has been seriously affected by the ailment, is still battling for his life.

Apart from spending all his life savings on hospital bills and drugs, the illness has cost him his marriage. In fact, E PUNCH gathered that at a point, Uche’s wife was forced to leave their matrimonial home because she could no longer cope with the burden of taking care of him and their three children.

Uche’s case has progressively declined over the past years. Apart from suffering an undefined heart disease, he is gradually losing his memory and sight (he could barely glimpse our correspondent). Also, to compound the actor’s problem, his kidneys no longer function properly.

Over the weekend AGN President Ibinabo Fiberesima stated that he hasn’t been forgotten but according to Prince Uche’s rep, a lot of the promises made have not been fulfilled.

Watch the video below: