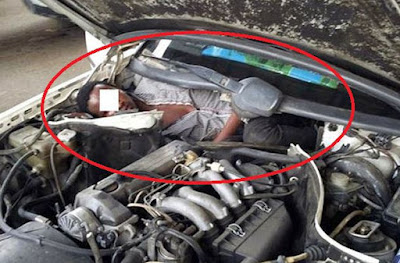 A desperate migrant was captured attempting to smuggle himself into Spain while hiding behind a car’s engine.

The unidentified man - who is thought to be from Guinea - was discovered by stunned officials at the Spanish enclave of Ceuta.He were discovered after police thought the car’s driver was nervous.

According to the Telegraph,the car had travelled from Morocco and border officials found the migrant lying in a foetal position behind the car’s engine and radiator.
His health was reportedly in a bad way because of the petrol fumes and searing heat.

As reported by the Telegraph, another migrant was discovered hidden behind one of the car’s seats. Neither man has been identified.Both were taken too hospital and treated for dehydration and cramp. Doctors warned they could both have died had they been trapped for much longer