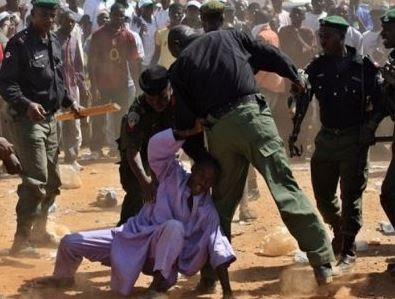 The Force Criminal Investigations Department (FCID) of the Nigerian Police force has arrested and detained an Assistant Superintendent of Police, ASP, and six other Police officers over allegations of extra-judicial killings in separate incidents that occurred in Abuja and Benin, the Edo State capital.

The first case resulting in the arrest of the ASP (Mohammed Yusuf) and two officers (Corporal Agada Lawrence and Corporal Agada Kenneth, involved the extra judicial killing of the son of the former Chairman, Senate Committee on Defence, Senator Fidelis Okoro, in Abuja last year.

According to Police sources, Mr. John Chukwuemeka Okoro (son of Senator Okoro) and a friend of his (Sunday Markus alias Sunday Black) were at the Durumi district of the Federal Capital Territory, FCT, Abuja, on the 11th of August 2014, when a Police Patrol team received a distress call from
Mabuchi District that that some suspected robbers snatched a Toyota car from the owner.

The Police from FCT SARS consequently deployed and carried out a trail of the alleged robbers from Mabuchi to Durumi. In the process of trailing the car, the deceased, John Chukwuemeka Okoro, was arrested, while Sunday Markus escaped. The leader of the Police team then shot John Okoro firstly on the leg and secondly in the chest even though he was harmless, resulting in Okoro’s death.

Following a petition to the IGP by Senator Okoro alleging extra-judicial killing, Force CID investigated the matter, invited Sunday Markus for interview and his statement. The owner of the alleged stolen car also made a statement.

Though the Police officers claimed there was a shootout and in the cause of exchange of fire, Okoro was shot and killed, investigation however indicted the Assistant Superintendent of Police and his 2 officers of extra-judicial killing.

They are currently in detention and police sources told Sunday Vanguard that they are awaiting ‘Internal Disciplinary Action’ after which they will be charged to court.

On the extra-judicial killing in Benin, Sunday Vanguard gathered that it occurred at Aduwawa area where one Benson Obode was extra-judicially gunned down.

According to sources, on the 19th of May 2015, four Police officers, Corporal Adeleke Adedeji, Corporal Abena John, Corporal Henry Shobowale and Corporal Oniyo Musa, who were investigating a case of armed robbery incident that took place in Agege, Lagos, went to Edo State as part of the investigation.

One Alhaji Babangida Isa was robbed of his Toyota car, GSM handsets, and other valuables. In the cause of arresting Benson Obode (suspect), who was mentioned by the receiver of the stolen car, the Police shot and killed him.

Following a public protest by his family and some members of his community in Benin, a petition was written to the IGP who ordered an investigation. The FCID consequently commenced a thorough investigation which led to the arrest of the officers.

A senior Police officer who confirmed the arrest of the officers noted that henceforth there will be no hiding place for such officers who take laws into their hands.

It will be recalled that the Inspector General of Police, Solomon Arase, warned recently that the Force under his command would not tolerate extra-judicial killings while another mantra has been that police officers should respect the human rights of suspects.