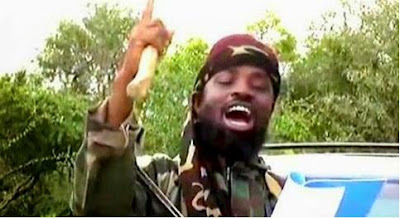 Boko Haram leader Shekau Abubakar has labelled as lies reports that Nigeria's military is gaining in its counter-offensive against Boko Haram.

Army spokesman Sani Usman yesterday announced that troops destroyed more rebel enclaves and camps in the restive state of Borno, which has been worst hit by the six-year Islamist insurgency.

"The fight against the terrorists in the northeast is gaining successful momentum, with most of the camps falling to the Federal might," he said in a statement. A total of 62 people were rescued from around the town of Gwoza, which last year Boko Haram declared the headquarters of its caliphate but which it lost control of in March.
Some 77 men, women and children, most of them "haggard, dejected and obviously malnourished", also arrived in the town of Bama on Saturday, Usman said.

One man picked up said he had his right hand cut off by militants in their Sambisa Forest stronghold in Borno last year, he said, adding that eight Boko Haram suspects surrendered to troops.

However, Shekau who has not been seen on video since February, said in a 25-minute recording in Hausa and Arabic via social media:

"They (the military) lied that they have confiscated our arms, that we have been chased out of our territories, that we are in disarray. We are alive, I am alive, this is my voice, more audible than it was before. This is Shekau."

"Buhari is a liar and has deceived you. The army spokesman is also lying. He and his footsoldiers always run helter-skelter whenever we come face to face with them...

"Buhari, you once claimed that you will crush us in three months. How can you crush us?"

There was no indication of where or when the recording was made but it appears to have have been in recent days. AFP reports that Shekau directly referred to IS group leader Abu Bakr Al-Baghdadi, to whom he says he is "loyal and subservient".

He also namechecks IS spokesman Abu-Mohammed al-Adnani and sends "greetings to the faithful in Yemen", where there is also an IS "affiliate".

Shekau talks of Buhari's "deal with Hollande", referring to the Nigerian president's three-day visit to Paris earlier this week, which included talks with his French counterpart Francois Hollande.

He also dismissed as untrue Buhari's comments about "our brethren in prison".

Buhari this week said the Nigerian authorities were talking to Boko Haram prisoners in their custody and could offer them amnesty if the group hands over more than 200 schoolgirls abducted last year.