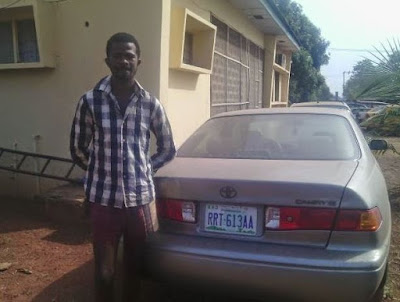 Police in Enugu have arrested a suspect (names withheld), who slashed the throat of one Anthony Nnamani in a bid to snatch the victim’s Toyota Camry, at Udenu Local Government Area of Enugu State, on August 28.

According to Vanguard, an eyewitness said that the incident, which occurred at about 3:40p.m., quickly drew peoples’ attention, noting that they thought the car snatcher was a ritualist.

Police Public Relations Officer, Mr. Ebere Amaraizu, confirmed the incident in a statement, saying operatives of Udenu Police Division got wind of the incident, rushed to the scene and arrested the car snatcher.
Amaraizu said: “The suspect will be charged to court upon the conclusion of our investigation.”