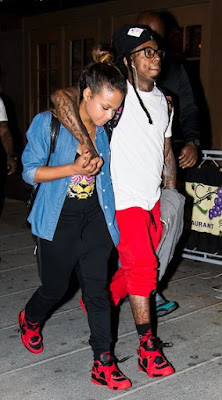 After a year of dating, Lil Wayne and Christina Milian have split up.

The duo began dating back in July 2014 but kept their romance under wraps for quite a while until Milian began dropping hints about a special someone in her life.

Then, once the news was out, she couldn't help but gush about her rapping boyfriend.

Sources close to the ex-couple blamed their busy schedules for the break-up, and media reports say neither's pointing fingers. In other words ... it's amicable. A source told E!:
"They have broken up. Their schedules started getting extremely busy and the distance was not easy for them both. They are not on bad terms. They just are taking a break. Christina is focusing on herself now and surrounding herself with her close girl friends like Karrueche Tran. They both understand each other and girlfriends are exactly what she wants about now."

Wayne and Christina released some tracks together earlier this year, and t's unclear how the split will affect their professional relationship.