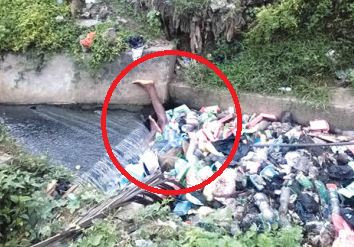 A war is brewing in the Mushin area of Lagos State after some suspected cultists dragged a motorist out of a commercial bus and buried him alive.

PUNCH Metro learnt that the yet-to-be-identified victim was on his way to the Oyingbo area of the state.He was said to have been dragged out of the bus at the Total bus stop in the Mushin end of the Ikorodu Road.

A witness, Jacob Amos, said the incident happened around 8pm on Wednesday, adding that policemen from the Alakara Police Division were alerted.
He said,

“The man was in the bus when he was dragged out at Total bus stop. They brought him into Mushin and I immediately alerted the policemen from Alakara.

“Around 10pm when everybody had gone home, they brought the man to the Railway Line and push him from head down into a filled canal. Only his leg was sticking out.”

The victim was said to have died soon afterwards.Our correspondent learnt that policemen from Alakara later arrived on Thursday to remove the corpse.

A witness, who did not identify himself, said the police ordered him to pull out the corpse from the murky water.

Friends of the deceased from Market Street, Oyingbo, were said to have shown up to identify him.

A resident lamented that the police in the area, were not doing enough to arrest the unrest in Mushin, lamenting that there were saboteurs in the force.

He said it was the second time in a week that people from the Oyingbo area would be hounded and killed in Mushin, which could start a war between the two communities.

“The police in this area have been compromised. When we called them yesterday that someone had been captured around Oyewusi Street, an informant of the cultists whom we suspect work with the police, quickly alerted the guys and they left the place.

“They brought the victim to our side to make it look as if we are responsible for his death. Their plan is to set the Oyingbo boys against us and trigger a war.”

Residents of the area alleged that the increased killing of suspected cult members from Oyingbo was orchestrated by one Rilwan, aka Itakun.

Other men said to be in the group are White, Ese Chicago, Ina, Anarchy and Riliwanu.

The source said Itakun had his family house in Oyingbo and left the area due to persecution by some suspected cultists.

He said, “After he left, he started living in Mushin with a gang member. Later, he decided to start paying back those he perceived as the leaders of the gang in Oyingbo.

“Last week, he invited one Tunde Eleto to Mushin and the man was stabbed and shot dead by his squad,” he added.

However, another resident, who spoke on condition of anonymity, denied that anyone was killed in the community.

He said, “There is nothing like that. Nobody was killed on the Railway Line or anywhere for that matter.”