Doctor disappears after going outside for fresh air [PHOTO] 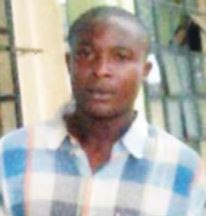 Relatives of 29-year-old graduate of Anatomy, Dr. Adedayo Adewumi, have been thrown into confusion following his disappearance.

It was gathered that Adedayo, a first time visitor to Lagos, went missing on August 27 after he step out of the house for fresh air.

The family told our correspondent that Adedayo came to Lagos State from Port Harcourt, Rivers State, on August 22 and was staying with some family members on Alawode Street, Kilo, in the Surulere area of the state.

His father, a retired engineer with the Nigerian National Petroleum Corporation, Mr. Ademola Adewumi, told our correspondent that he was worried because the missing man was diagnosed with schizophrenia in 2006 while studying Medicine at the University of Ilorin, Kwara State.

Schizophrenia is defined by the dictionary of Medicine as a mental disorder often characterised by abnormal social behaviour and failure to recognise what is real.

“I suspect he is wandering around or languishing somewhere by now. We have gone to all the police stations in our area and beyond. But my major worry is that if there is a case of accident or wrongful arrest, the police will be able to tell, but they may overlook a case of a man wandering aimlessly.

“I have his medical records with me. He has been treated six times for the condition, but always had a relapse. However, since he graduated in 2012, there had been an improvement. That was why we suggested a visit to Lagos hoping that the change of environment will help.”

Adedayo was said to be the eldest of three boys. His younger brother, Adeshina Adewumi, a banker with a commercial bank in Lagos, said Adedayo had bouts of depression in the past, it made him to disconnect from people and to stop using his phones, adding that there had been an improvement in his condition following his graduation and the end of the National Youth Service Corps.

“While in school, he was often depressed. But when he finished school, his condition improved. Since then, he has always been in a guided environment.

“Shortly before he came to Lagos, he fell into depression again and my father suggested that he should come to Lagos with the hope that the change of environment would lighten him up.

“He did not have any disagreement with anybody, he was happy to come to Lagos. In fact, a day before he went missing, he was planning to go with me to Lekki.”

The Lagos State Police Command spokesperson, DSP Patricia Amadin, promised to get back to our correspondent on the matter.