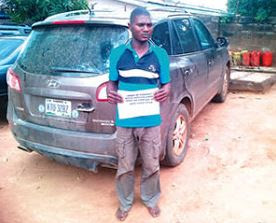 A robbery suspect, Mr. Danie Usman, confessed that he stole a Hyundai jeep belonging to his boss, simply identified as Xans, to punish him for cheating him.The suspect had confessed to removing the vehicle from the company yard at Ado-Ekiti and was enroute to Abuja to sell it when he was apprehended.

“Usman said he was forced into the crime to punish Xans who was the site manager of the company.

“He said Xans, who is his direct supervisor, had used him many times to allegedly commit several crime of cheating the company of its money and resources.
The suspect informed the police that his master stole the company’s money through three private bank accounts with and that he didn’t compensate him.

“The driver said the idea of selling the jeep came to him as a last option when he demanded from his master N500,000 to buy a small car but he gave him only N300,000 instead.

“That was why he was in Lagos with the car where he was offered N1m. He changed his mind to go to Abuja for a better offer before his arrest by our team near Jebba Bridge.”