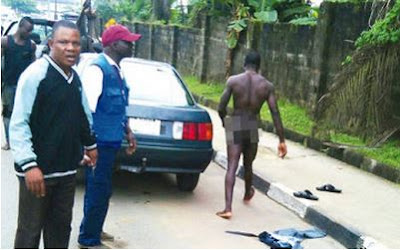 In a display of absurd mannerism, an unidentified commercial vehicle driver on Tuesday removed his cloths and started behaving strangely when officials of the Federal Road Safety Corps stopped his car and demanded for his vehicle particulars.

The incident happened along the busy Marian Road in Calabar, the Cross River State capital. According to an eyewitness, the naked driver, whose vehicle registration number was Edo AUC 901 XS, came out of his vehicle and started behaving funny by removing his cloths.


The eyewitness, who identified himself as Raheem Bayoor, said officials of the FRSC were stunned by the behaviour of the driver and did not attempt to struggle with him as he resisted arrest. Bayoor said,
“The man just came out when the FRSC officials requested for his particulars and started pulling off his cloths. It is obvious that he was abnormal; a mad man behind the wheel.
“The FRSC officials were stunned and did not attempt to create any scene as it was obvious that the driver was ready for any rough encounter.”
When contacted, a furious state Commander of FRSC, Mr. Ikechukwu Igwe, said he had ordered his men to trace the driver through the vehicle and get him arrested.

“We will definitely get him,” he said.