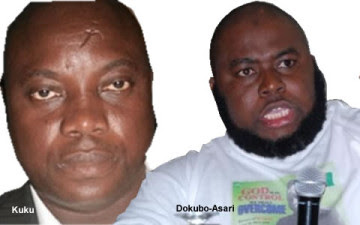 In line with president Muhammadu Buhari's anti-corruption campaign, the Economic and Financial Crimes Commission has secretly frozen the bank accounts of former President Goodluck Jonathan’s associates.
According to PUNCH, the move by the anti-graft agency was aimed at scuttling the transfer of the alleged looted funds from the accounts for other reasons.


A member of a key transition committee of the All Progressives Congress, who spoke to one of our correspondents on condition of anonymity, on Friday, said the need had become necessary in view of the magnitude of the alleged theft of public resources by the affected persons.
The affected accounts, SUNDAY PUNCH learnt, belonged to Keketobou Foundation, owned by former Special Adviser to Jonathan on Niger Delta and Coordinator of the Amnesty Programme, Mr. Kingsley Kuku, and Mieka Divers Limited as well as Global West Vessels Limited reportedly owned by ex-Niger Delta warlord, Mr. Government Ekpompolo, aka Tompolo.

Further investigations by our correspondents also showed that one of Jonathan’s close allies, Mr. Kime Engozi’s accounts had also been flagged.

Engozi is the contractor handling the N30bn Maritime University contract at Okerenkoko in the Gbaramatu area of Delta State.

Besides, funds already approved for the commencement of the university are said to have remained frozen in a Yenagoa branch of the United Bank for Africa Plc.

The NIMASA Technical College at Okoloba, also in Delta State, is also said to be facing an uncertain future as there are fears that the institution might be scrapped.

Accounts linked to the former Director General of NIMASA, Dr. Patrick Akpobolokemi, are also said to have been frozen by the EFCC.

The source, who is now in the Presidency, said although he could not confirm if Jonathan’s recent meeting with Buhari discussed the issue, the action to ‘flag’ the said accounts might have been for security reasons.

The source also said the opposition Peoples Democratic Party was ignorant of the workings of the Federal Government, especially on security.

The source added, “This is not a matter of lobby or any politics that should be shoved aside; what is at stake is the nation’s security and nothing more.

“When the PDP says the current anti-corruption drive is selective, we continue to laugh at them because they do not seem to know what is at stake at all. If only they know, all the noise they have been making won’t be made at all.

“How many of these PDP elements know that just one individual benefitted from a single NIMASA transaction to the tune of N13bn, not to talk of about $57m he was said to have benefitted from controversial contract deals?

“Are these the things they ask us to sweep under the carpet? Certainly, we cannot because apart from the angle of the impunity and financial recklessness, does it make any sense if any responsible government allows such individuals, who had threatened war in the event that Jonathan did not win to have such huge sums in bank vaults? Such accounts must be flagged, of course.”

However, the PDP has asked President Buhari to follow the rule of law in his government’s determination to fight corruption.

The National Publicity Secretary of the PDP, Mr. Olisa Metuh, in an interview with one of our correspondents on Saturday night, asked the President not to spare anyone, including his friends and members of the ruling APC in the crusade.

Metuh said, “We are not against the war against corruption, but what we are saying is that the President must follow the rule of law.

“The law says every accused person is innocent until proven otherwise. Then, the President must also look at his party; he shouldn’t spare his friends.

“If any of our members is found to be corrupt, let them face the law of the land. But no one should be tagged as being corrupt when the court has not said so.”

Tompolo is not under any investigations by the EFCC, but Kuku has a date to keep with the anti-graft agency in September, having gone for a knee surgery in the United States of America in July, while the former NIMASA boss has been under investigation for over month.

However, Akpobolokemi’s interaction with the EFCC has been linked to business deals by him while he held sway at NIMASA and the ex-warlord.

SUNDAY PUNCH also learnt that EFCC’s seizure of Akpobolokemi’s international passport and a N38m worth bullet-proof Toyota Landcruiser was already heightening speculations that he might be prosecuted if findings by the investigators indict him.

At least three close aides and confidants of the ex-NIMASA boss, including the current Executive Director in charge of Maritime Safety and Shipping Development, Mr. Ezekiel Bala Agaba, have been guests of the EFCC in the last ten days.