Footballer Lavezzi Caught with his trousers down... wearing a woman's pant [PHOTOS] Paris Saint-Germain star Ezequiel Lavezzi has carved out a solid reputation as one of football's alpha males in recent years.

The Argentine, then, may have some explaining to do after a set of photos circulated on Tuesday showing him at a party with his trousers around his ankles.


More than the partial nudity, what caused more raised eyebrows was 'Pocho's' choice of attire beneath his clothes; a skimpy white 'thong' which left little covered.

Lavezzi was exposed by Argentine model Mariana Diarco, who has repeatedly accused the footballer of trying to lure her away from boyfriend, cumbia singer Dipy Martinez.

"Not even while you're separated do you calm down, you're still sending me photos Lavezzi!" Diarco wrote on her Twitter, alongside the photos. 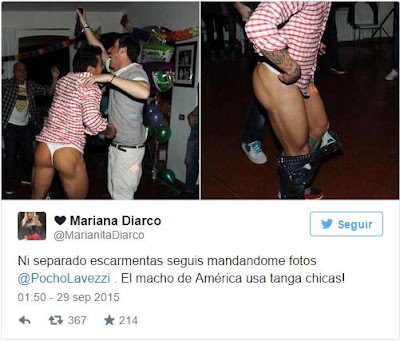