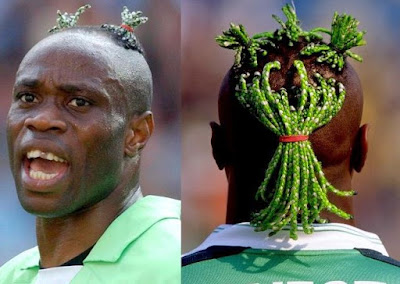 Former Super Eagles defender turned pastor, Taribo West has in a new interview with 'Tana Aiyejina of Punch revealed how footballers use charm to win matches.

According to Taribo, he is bewildered that people are reluctant to publicly identify themselves with the practice, saying players and officials are deeply involved in the act. The 1998 UEFA Cup winner adds that he used to burn candles and hold a magical stone from Israel before games.

On getting to Europe, Taribo had found himself entangled in a life of charms and superstitious

beliefs. A move from Auxerre to Milan saw him playing for rivals AC and Inter — one of few players to achieve the feat — in a three-year stint in Italy.
With a new-found life of affluence, the big defender paid huge sums of money for him to be supplied charms to win games, protect him from career-threatening injuries and also to be foretold the results of matches before they were played.

“Of course yes (I was involved). I don’t know why people decline to talk about their involvement with charms. Football has to do with a lot of powers. When there are big events, you look at the stadium, you see people, fans invoking all kinds of things; magicians are there, voodooists are there.

In my playing days, when I was ignorant, I used to get some mallams and babalawos (traditional doctors) to make charms for us, which we took to (national) camp. Sometimes it worked, sometimes it didn’t.

In some clubs, before every game, the president or leader of the club will give you a lucky charm to play with. They will tell you to put it in your boots or socks and play. It’s their superstitious belief; that it can help them win matches.

There are some coaches who are connected to African magicians and soothsayers from Senegal, Burkina Faso, Zaire or even Nigeria. These people are consulted to give these coaches results of games even before the matches are played. These people see strange things and they can tell you with their magic and charms, what the outcome of a match will be.

People believe and use it. It works for those who believe in it. I saw it, I experienced it, I was with players that used it and I used it. So, why are people denying it? There are charms and rituals in football. It still exists.”

When Patience Ikemefuna, an evangelist who lives in America paid Taribo a visit in Milan, it marked a new phase in the 1996 Olympic Games gold medallist’s life.

Ikemefuna was perplexed when she discovered that Taribo was deeply involved in occultism. There were charms in his wardrobe and other parts of his apartment. Even though her host resisted initially, she convinced him and after several praying sessions, Taribo gave his life to Christ.

Today, even though they are not biologically related, he refers to Ikemefuna as “my sister.”

“God used her to change my life and ever since, my life has never been the same. I’m grateful to her. When I had an encounter with God and I became born again, I discovered that these powers were powerless. It was an avenue to collect money from us. There are lots of voodoo practices in football. If you are not with God, you have to be with the devil; with the devil they come with everything,” he added.

What is the difference between life in Christ and one filled with charms?

“You can’t compare,” he said. “When I was living that ignorant life, I was in darkness. In the darkness, the devil can give you what God can also give you, but he will give you without joy and peace. Eventually, you will end up in sorrow. But when you experience the joy of Christ, it adds no sorrow.

“Temptation is permanent; From my house to the bus stop, I may see a young girl not properly brought up, dressed half- naked walking on the streets. You will see temptation right there. But you have to pray for God’s grace to overcome the temptation. The joy of the Lord is not only my strength; it gives me everything I need in life.”

Read the rest of the interview HERE.