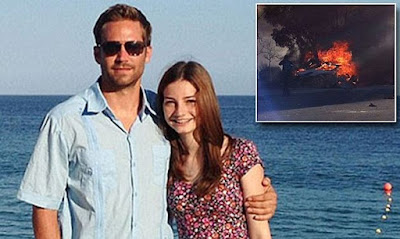 Paul Walker was still alive when the Porsche he was a passenger in caught fire after the horrific crash that took his life, according to a lawsuit filed by his daughter Meadow.

The 16-year-old, whose father died in 2013, has filed a wrongful death lawsuit against Porsche claiming that the 2005 Carrera GT Walker was riding in had specific design flaws that contributed to his untimely demise.

According to the lawsuit obtained by TMZ ,Meadows lawyers claim when the Porsche Carrera GT crashed and broke apart, Paul's seat belt "snapped Walker's torso back with thousands of pounds of force, thereby breaking his ribs and pelvis," and trapping him in the passenger seat.
The suit claims the fire didn't erupt for 1 minute and 20 seconds after impact, but Paul was helplessly trapped. When the fire broke out, Paul was still alive. The suit alleges, "Paul Walker breathed soot into his trachea while the Porsche Carrera GT burned."

Law enforcement said the cause of the crash was speeding 80 to 93 MPH - at the hands of driver Roger Rodas. But the lawsuit says Rodas was only going between 63 and 71 MPH when it careened out of control. And the suit alleges the car would never have careened if it had a proper stabilization system.

Meadow's lawyers claim Porsche knew the Carrera GT had "a history of instability and control issues."

Meadow's lawyers say the defect could have been corrected with a Porsche Stability Management System (PSM), which prevents swerving. They say the company intentionally decided not to install PSMs in the Carrera GT, even though it was standard in many other models.

The suit raises other issues with the car, including claims there were deficient side door reinforcements and fuel lines that did not adequately protect the car from erupting in flames.

"The bottom line is that the Porsche Carrera GT is a dangerous car. It doesn't belong on the street. And we shouldn't be without Paul Walker or his friend, Roger Rodas."

The wrongful death lawsuit does not put a figure on damages