Home Gossip News How we cut the buttocks of armed robber, kept his flesh for sale - Suspected Ritualists [PHOTO]

How we cut the buttocks of armed robber, kept his flesh for sale - Suspected Ritualists [PHOTO] 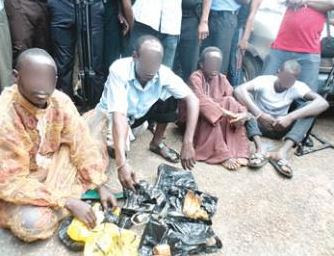 A member of the syndicate, Odetunde, confessed that he got the human flesh from Elijah and one ‘doctor’, one Olusegun Babarinde, who was discovered to be a retired mortuary attendant.

Briefing journalists on the arrest of the suspects, the Commissioner of Police in Oyo State, Leye Oyebade, said the suspects were found in an uncompleted building and when searched, pieces of human flesh were found in their possession.

According to Oyebade, “the suspects, some of who wore garments and pretended as if they were coming from a church, claimed to be members of a white garment church. But upon interrogation and search, pieces of human flesh were found in their possession.

Crime Reports also learnt that Babarinde retired from one of the teaching hospitals in Oyo State.when interrogated, he was said to have confessed to the police that the human parts he supplied to Odetunde were taken from corpses deposited at the hospital mortuary. He further claimed that they either belonged to unclaimed corpses of armed robbers brought in by the police or mad people who died on the streets.

He referred to such corpses as wastes, saying he usually took some parts of the corpses before mass burial. Knowing the workings of the mortuary, despite having retired, Babarinde said he used to go to the mortuary on Saturdays when he knew other attendants would not be available.

“I was at Odo Oba when Odetunde called me on phone that he needed the flesh of a dead armed robber which he could use. I told him I had some which I got from a deceased armed robber when I was still working as a night guard. My partner, one Tunji, and I killed him beside a river at Odo Oba along a private hospital road because he ran away when we tried to stop him one night.

“My partner cut a part of the armed robber’s buttocks and kept it. That was about four months ago. I covered it up somewhere and regularly preserved it with schnapps. My partner died the following day in an accident when he was going to Osogbo.

“I told Odetunde that I would check the remaining human flesh I kept and he asked me to bring it to him in Oyo. He asked Mr Adeniyi to use his motorcycle to bring me to Oyo. I tied the human flesh in a polythene bag and took it to him. As we were talking, police came and arrested us.”

In his own confession, Odetunde (65) stated:

“I am a prophet of a C&S church. It is true I asked Elijah to get some human flesh for me. I wanted to use it to perform rituals for someone. I use any part of human flesh. I took the buttock part from Elijah while I got the fleshy rib part from one ‘doctor’ in Ogbomoso.”

“Odetunde had a church at Odo Oba before he moved to Lagos State. So he said he needed to rent the place out since no member was attending the church again. We wanted to discuss on how I would be in charge of the church. He called me recently and asked me to join him in Oyo. He wrote some things in a paper for Elijah about ritual processes but I was not involved. We were together when police came to arrest us.”

But Odetunde said that Adeyanju knew about what he was doing and had come to him so that he could understudy him and learn how to do such rituals too.

Jacob, who is Odetunde’s son, said:

“I didn’t know anything about the issue. My father called me and told me he was coming from Lagos State to Oyo. I went to him so that I could greet him and get some money from him. I met Adeyanju and Elijah with him.”

Crime Reports gathered that the suspects had been charged to court.