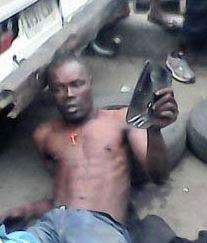 A robbery suspect, yesterday, met his waterloo, following attempt by an angry mob to lynch him at Berger Yard, along Apapa/Oshodi Express way.

The suspect, it was gathered, sneaked into a park under the bridge where second hand cars were kept at about 5.30am. He reportedly detached the side mirrors of one of the SUVs, unknown to him that guards had sighted him.

Vanguard reports that, the guards were said to have blocked all exit points, apparently to prevent him from escaping, before they raised the alarm.


The suspect was said to have used the vehicles as means of escape, but was sighted by a Mobile policeman attached to one of the companies nearby who rushed to the scene on hearing the alarm. He shot the suspect in the leg.

Attempt by the policeman to take the suspect to the station failed as a mob descended on the robber. The mob, put an unused tyre round the suspect’s neck in an attempt to set him ablaze.

An eye witness said the suspect spoke in Igbo language begging the mob to spare his life and attributed his indulgence to hunger.

An eye witness who gave his name simply as Kelechi, said: “The suspect would have been set ablaze but for the timely intervention of a Police team. He said he was from Mbaise in Imo State and pleaded with the mob to spare him since they were from same region. He said he stole because of hunger. When asked how much he intended to sell the mirror, he said N5,000,whereas you can’t get it less than N15,000 in the market.

“This is not the first time we have been experiencing such thing here. Sometimes, one will leave a car intact only to return next day to discover that the side mirrors and other parts had disappeared. What we did was to increase the number of guards at the different parks.”