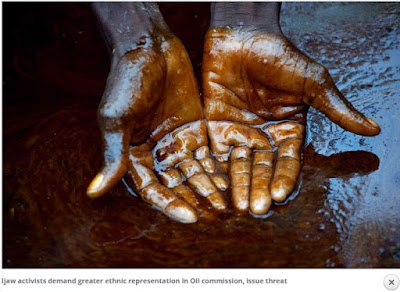 The last may not have been heard of the recently constituted board for Delta State Oil Producing Areas Development Commission (DESOPADEC) as Ijaw people, under the aegis of Flow Station/Well Head Host Ijaw Communities of Delta State, have issued a two-week ultimatum to the state governor, Dr. Ifeanyi Okowa, to revisit the composition of the board.

They maintained that the new board was lopsided because, according to them, Ijaw people were not given a fair share, considering that Ijaw areas produce the largest crude oil quantum to the state’s overall output.

This complaint was contained in a position paper signed by the group’s spokesman, Sheriff Mulade, after an emergency meeting in Warri, threatening to head to court to seek a redress if the governor fails to acquiesce to their demands.

‘’Ijaw areas produce the highest production quantum and were given only two slots in the new board, whereas other areas which produce less, were given more slots. This is deliberate and wicked. It is a clear case of injustice and it is unacceptable to the Ijaw people.’’

They advised the governor to find a way out of the situation for the sake of fair play and justice, and that the fragile peace and security in the state were at stake.

‘’We want the governor to revisit this abnormality and find a lasting solution to it for the peace and security of the state, or else we have no other option than to take legal action against the government for equal representation. We reiterate that appointment into the board should have been done based on production quantum and not to patronize political jobbers,’’ Mulade noted.

They decried the health challenges and deprivation bedevilling the people in the communities hosting oil and gas facilities, stating that derivation was the only way to give something back to them to lessen their plight.

According to them, the 50 per cent of the 13 per cent derivation fund budgeted for DESOPADEC, should be used strictly to execute “mega” projects in the core communities hosting flow stations and well-heads, and that government should make public how it intends to expend the remaining 50 per cent of the share.

“Government should desist from sharing the money henceforth and we want the Commission to embark on mega projects in the core host communities to bring development closer to them. They should work out plans on how to remediate the already devastated lands, build the capacity of the locals to give them a sense of belonging.

“Derivation, as it were, is simply a principle of giving back to the source of revenue generated through natural resources and it is a compensation for the loss of fishing and farming rights, health challenges and environmental degradation caused by oil exploration and production activities in our communities. Oil and gas are not produced by ethnic groups but are produced in communities which bear the brunt of oil exploration and production activities.’’