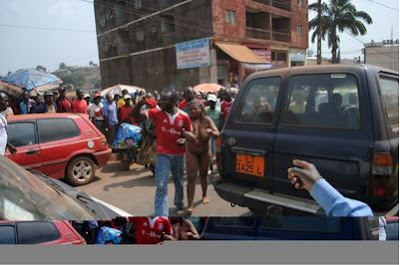 Two young women aged 20 and 25 years respectively – one in a mini-skirt and one in a top that left her entire breast almost exposed, were molested by a large group of men in Cameroon.

Eyewitness say a group of men gathered in front of the shop the girls had entered. As soon as the girls came out, the men followed them, s**ually molested and str!pped one of the girls naked and started taking photos with their cellphones.

Her friend who tried to assist her was also abused. The girl who wore the mini-skirt was eventually rescued by police, who escorted her home, whilst the other was saved by a businessman, and was also later escorted home. too bad