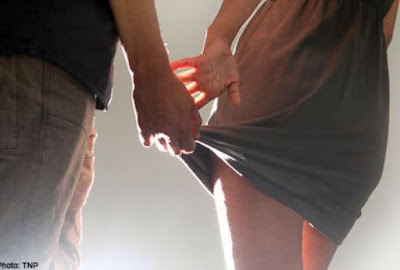 I am here to expose the acts of some guys who indulge in silly acts in public buses and also to seek how these evil acts can be curbed. Please find below my experiences:

Two months ago, i boarded a bus home after work on a friday night. I was so exhausted due to workload at the office and also the struggle to get a bus. I managed to get settled in the bus as the seats were so tight. I was seated directly behind the driver by the window. As we were transiting, I tried to chat with my friends on BBM so I wouldnt sleep off. I hardly sleep when transiting but that day I was too tired to even chat so I kept my phone inside my bag and placed it on my laps, then i rested my head on the driver's seat to take a short nap as my destination is still far. I boarded the bus from iyanoworo going to Ikorodu.

While sleeping, I felt something on my b**bs but I thought it just some imagination and then i dozed off again. I felt same thing again then i noticed that the guy sitting beside me was actually touching my b**bs but I wasnt so sure so I pretended i was dozing again and as soon as he repeated the act, i held his hand but he quickly dragged off his hands.

I was too shocked to believe shocked. I was perplexed. I couldnt say a word. I gave him a stern look and I told him to adjust himself. The reason I couldnt shout was because I didnt want to be embarassed by the passengers. The guy could actually lie about it as there were no evidence and the passengers were mostly men in the vehicle.

I was just shaky and the guy was just humming along with the music been played in the bus and nodding his head like nothing ever happened. He alighted at the next bustop. Then, I promised myself that I would be more vigilant in the bus.

But this recent one really shook me cry. I boarded a bus going to CMS around 5:30am last Monday. I sat at the back seat and here came this guy who sat beside me. He was well dressed, had his suit on his hands and he was putting on recommended glasses. As we moved, the chilly breeze blew across our faces which made about 80% of the passengers sleep. I dint sleep as usual but I wasnt comfortable because I was sick over the weekend so I was still feeling feverish.

I dropped my bags on my laps and was trying to just BE when i felt something on my laps. I thought it was the heavy loads i put on my laps so i readjusted. The bus I boarded was on high speed making so much noise and bumping into different potholes without caution. So i was really uncomfortable.

To cut the long story short, as we got to CMS Ajah park, the man that sat on my left side alighted which made me shift to his position. Then this guy also shifted closely beside me. I wondered why he sat that close when there were spaces but I ignored it since it didnt disturb me. As we got to our final destination, I carried my bag up so as to prepare to come down, Lo and Behold, this well dressed guy had his left hand on my laps just underneath my bags where my kitty lies while he had his suit on his second hand. I was so furious. I shouted at him, insulted him, asked him what he was doing. He didnt even mention a word, he was just murmuring.

When we got down, I held him and was shouting but then what would that do? He just kept on walking away and he told me am embarrassing myself. I felt humiliated and assaulted. I was bitter. Some men asked me what happened and i explained. They said I should just ignore him and go so I dont embarrass myself and that I should go and pray. I was so sad that I almost cried. He wasnt even remorseful.

But i thank God i anointed myself that morning. This is what I do every morning before I step out, I also take a shot of the anointing oil and pray with it. It is a kingdom mystery that I partake in. So whatever evil he might have attempted, It has been destroyed by the anointing.

Ladies, please be very sensitive and vigilant in public buses. These monsters are out there. Its strange but true. Only God knows if they do it for diabolical purposes. I had a lot of questions running through my mind: Since when was his hand on my laps because I still adjusted for the other man to come down? How come I didnt even notice not until we almost alighted? How did his hands get there? God will definitely judge him.

Ladies, Please do share your experiences if you have encountered such before so as to serve as a warning to others. Responsible men in the house, is there a drive that makes some guys behave like that or you think its just for diabolical purposes. Your comments are highly appreciated. Thank you.