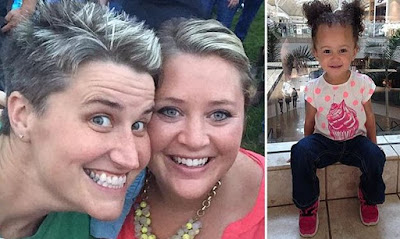 A lesbian couple are suing a clinic in Ohio following the birth of their mixed race baby. Jennifer Cramblett selected a white, blonde-haired, blue-eyed donor labelled No 380. But she was artificially inseminated with a black man’s sperm by mistake. .

While she and her partner, Amanda Zinkon (left), adore their daughter Payton (right), they are suing the clinic amid claims she will grow up feeling out of place in their mostly-white hometown in Ohio.

‘Getting a young daughter’s hair cut is not particularly stressful for most mothers, but to Jennifer it is not a routine matter, because Payton has hair typical of an African American girl. ‘Jennifer was crying, confused and upset,’ the lawsuit says. ‘All of the thought, care and planning that she and Amanda had undertaken to control their baby’s parentage had been rendered meaningless. In an instant. Jennifer’s excitement and anticipation of her pregnancy was replaced with anger, disappointment and fear.’
To get a decent cut, Jennifer must travel to a black neighbourhood, where she is obviously different in appearance, and not overtly welcome.’

Miss Cramblett said she grew up in predominantly white town and didn’t meet a black person until she attended university. She and her partner live in the mainly white Uniontown, Ohio, and fear Payton will be the only non-white child in class at school.
Miss Cramblett claims she was worried her family might not accept an African American child.

The sperm bank sent Miss Cramblett an apology note and a refund. Miss Cramblett told NBC News: ‘I am happy that I have a healthy child but I’m not going to let them get away with not being held accountable.‘You can’t just go, “Well you got a baby so you should be happy”.’
Her claim for damages for wrongful birth and breach of warranty was thrown out by a judge last week but she has been told to resubmit her claim on the grounds of negligence and will return to court in December.