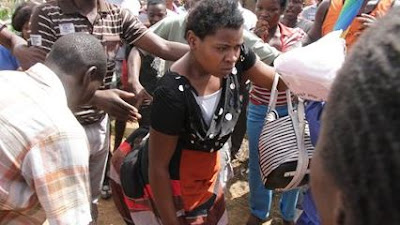 All hell was let lose in Ajegunle on Saturday when a man identified as Udoh caught his wife having sex with a neighbour in his bedroom.

The adulterous wife identified as Gift, a mother of two kids, and the next door neighbour, Chukwuka, were making love in her bedroom, at Ojo Road when the husband, Udoh, arrived and was hinted about what was happening by their neighbours as the sacrilegious relationship was public knowledge even though Gift and Chukwuka thought that they were discreet.
Udoh was said to have peeped through an opening in the window and saw Chukwuka having sex with his wife.

A neighbour who identified himself as Joseph Enang disclosed that immediately Udoh saw Chukwuka on top of his wife, he screamed: “Abasi mbong!” and rushed to the door where he screamed the name of his wife, Gift.

Udoh was said to have attempted to break the door of his bedroom when his wife Gift opened it and he dashed in but Chukwuka escaped through the sitting room door.

Enang said Udoh was looking for his cutlass under the bed when Gift escaped from the house.

“When Udoh picked his cutlass and came out looking for both Gift and Chukwuka, they were nowhere to be found. Udoh bit his hand and swore that if any of them returns to the premises, blood would flow. He called his wife’s elder brother, telling him to order his sister, Gift back home or he would not see her alive. He narrated what happened to her brother.

“The neighbours were aware of the adulterous behaviour of the duo. Chukwuka is also married and blessed with one boy. His wife had quarrelled with him over his relationship with Gift but he would not listen. He lied that there was nothing between them but just good neighbourliness. People in the compound knew what was going on and later told the man secretly and that was why he told the wife he was going to an emergency party at Ikorodu and may not return on time. Unknown to the wife and his secret lover, he had set a trap for them.
Source: Leadership