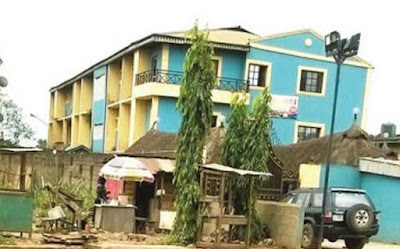 The management of the Western Lodge Hotel has announced that a man, identified simply as Sunday, has died at their hotel room at Ishawo Road, in the Ikorodu area of Lagos State.

Room service discovered his corpse around 1am in his room.

All the contacts on his mobile phone were said to have been deleted, making it difficult for his relations to be contacted.

The case was reported at the Owutu Police Division, while his corpse had been deposited in the Ikorodu General Hospital Mortuary.


On Monday, reporters observed that the hotel carried on with its business as usual.

Some of the ladies were seen outside smoking, while a few others attended to customers at the bar.

A source told Punch Metro that the deceased was poisoned.

He checked in around that 10am. It was around 1am that his corpse was discovered. The man was poisoned. The owner of the hotel reported at Owutu that they found his corpse in his room.

But when the police checked the man’s phone, they discovered that all the contacts and his phone calls had been deleted. There was nothing with which to identify him. Nobody knows his address and family.

A worker in another hotel in the area, however, said the victim might have killed himself.

He said since the incident happened, the hotel had been running its business at night.

I was told that somebody died there, but I don’t know the details except that when he got inside the room, he decided to take his own life. The hotel has continued to run its business as usual. In fact, not many people are aware of it.

A man, who spoke for the management of the hotel, said the victim died on the road and not inside the hotel.

You press people have come with your wahala, and you want to complicate matters for me. I don’t want to talk to you about the incident.

But if I will say anything, I will only say it didn’t happen here. The man stepped out of this hotel and was about crossing the road when he was hit by a car. One of his family members, a woman, has even been here. She even thanked me for my sacrifice because I had to give some money so they could take his corpse to Kaduna.