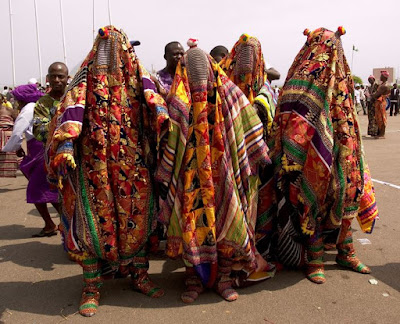 A Church service was reportedly disrupted by four masquerades who flogged the pastors and the worshipers in Epinmi Akoko area of Ondo state.

One of the masquerades, Tunde Arohunmolase was however arrested while others fled after flogging the pastors and the worshipers.Police source said that the masquerades invade the Christ Apostolic Church in the town while the service was on-going and abruptly ended it.

But they reportedly ‎overpowered them and went straight for their target.While other worshipers fled leaving the Pastors , their attackers reportedly had a field day dealing with them.
Vanguard learnt that the matter ‎was later reported at the police station and one of the suspect was apprehended.

Police detectives are probing the reason for the attack of the church by the masqueraders during the service.When contacted the police Image Maker, Wole Ogodo, confirmed that two Pastors were wounded during the attack and have been treated.

He gave the names of the Pastors as Jacob Ogunmola and Kehinde Ilori.

The Police Spokesman added that one of the suspect- Tunde Arohunmolase is in Police custody and has made useful statement.
Ogodo assured that the fleeing masqueraders would soon be arrested from their hideouts.