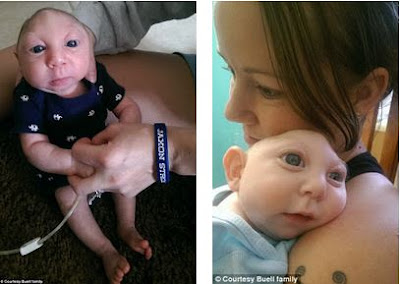 Born with most of his brain and skull missing, baby Jaxon Emmett Buell was not expected to live. In fact his parents had been told to abort him when doctors discovered his condition.
But he has defied all odds - and now he has just celebrated his first birthday.
30 year old Brandon and 27 year old Brittany Buell, were told by doctors that he had an extreme brain malformation, which meant he would probably not survive the pregnancy.

Jaxon was initially diagnosed as having Anencephaly, a neural tube birth defect in which a child is born without parts of the brain and skull, but doctors were still unsure of how severe his condition would be.

Brandon, said:'After our second ultrasound at 17 weeks, when we found out he was a boy, we knew something was up when the ultrasound technician went towards his head and went very quiet.'

'Brittany got the call the next day from the doctors saying there was a concern with the MRI results. She was in tears and told me there was an issue with the baby. Of course, I lost it at work so they sent me home and the rest of the day was a blur truly.'For the next few weeks, the anxious couple were transferred between doctors and given five possible conditions of what it could be. Spina bifida, Dandy-walker syndrome and Joubert syndrome
Doctors gave them the option to terminate the pregnancy at 23 weeks but they refused.

Brandon said: We went home that night thinking if you are telling us to abort, we would never know what Jaxon could have been, if he could have survived.'

'Who are we to decide? We were given a child, we are given a chance and we have to be his voice.'

'We did everything we could to give him a fighting chance and all he's done since being born is fight right back.'

Brittany said: 'I was devastated. It was heart breaking because something I always wanted my whole life was happening, but then I was told there was a possibility it might be a stillborn.

'It took all the joy away from me. The happiness that normal women have when they are pregnant - I had none of that.'

The miracle baby survived the pregnancy and was born by caesarian section on August 27, 2014 weighing 4 pounds.

He spent his first three weeks connected to multiple tubes in a neonatal intensive-care unit in Winnie Palmer Hospital, Florida, as brain surgeons tried to understand his condition.

Brandon said: 'It was very emotional. I remember holding him on day two and listening to the doctors say my son would probably never walk, never talk, never know when he's hungry, or never hear or see. They really did not expect him to make it.'

Following multiple hospital visits and a two-month scare of multiple seizures, inconsolable screaming, and feeding tube issues, Jaxon was taken to the emergency room at Boston Children's Hospital, a top U.S. hospital for pediatric neurology, in August and was diagnosed with Microhydranencephaly - and new medicine that has since eased Jaxon's condition and made him a lot happier.

Yet Brittany and Brandon still wake up everyday knowing the reality they face - that Jaxon may not be here tomorrow.

Brittany said: 'It is always in the back of my mind. I'm very aware that today maybe his last day. I'm aware tomorrow he may not be here.'

'I try to stay positive 99 per cent of the time but there is that 1 per cent because I know the reality of the situation - that we're probably going to outlive him.'

Brandon's work colleagues set up a GoFundMe page when Jaxon was born to help out the family with the pricey medication and extra expenses and almost $55,000 has been raised by 1,181 donors since then and the outpouring of support is growing day by day.

According to Daily Mail, the couple, who are living on only one salary, described the support as 'incredible' and said they 'never dreamed that this would happen.'

Jaxon's father said: 'He thrives with his mom, that one-to-one stimulation that no other therapy can give. If we can keep Brittany at home, giving him that 24/7 care is truly priceless and that's what his account allows us to do.'

Brittany said: 'It's all been so overwhelming in a positive way because we can't go anywhere without someone stopping us, and saying, 'hey, what's your story?' or they would have seen his picture and say, 'hey, look it's Jax Strong!' his nickname! It's truly incredible the amount of people he has had an impact on. 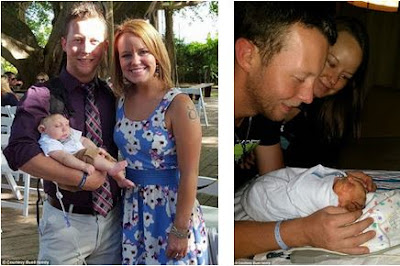 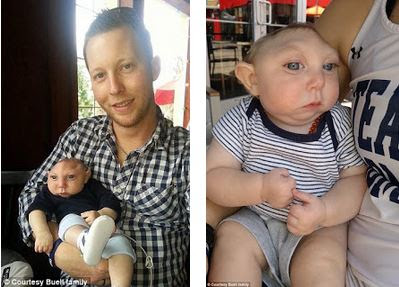