NDLEA Intercepts N57m Worth of Cocaine Hidden Inside Tins from Brazil 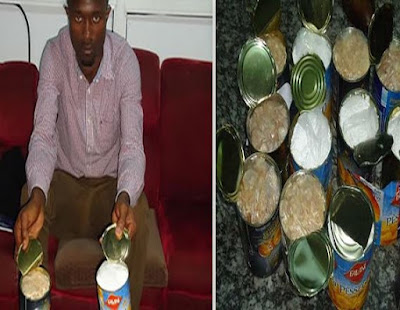 The National Drug Law Enforcement Agency (NDLEA) has intercepted 7.576 kilogrammes of white cocaine and 3.885 kilogrammes of crack cocaine brought in from Brazil. The total weight of the drug is 11.461 kilogrammes with an estimated street value of N57m.

Anti-narcotic officers also arrested five suspected drug traffickers in connection with the seized drugs. Unlike white cocaine, seizures of crack cocaine are not common in the country.

The airport commander, Mr. Hamza Umar, who disclosed that different methods were adopted in concealing the drugs, said:

“One of the suspects, Omoluonye Izuchukwu Simon, was caught with both white and crack cocaine in tins weighing 7.785kg. The crack cocaine weighed 3.885kg while the white weighed 3.900kg. "Akubueze Kyrian Nonso, 28 years old, had 1.110kg by the side of his luggage while Obidike Onodyer, 40 years old, ingested 11 wraps of cocaine weighing 0.485 grammes. "Others are Onyeabor Maduabuchukwu Friday, 35 years old, found with 74 wraps weighing 1.256kg and Ifoh Emma, 37 years old, caught with 34 wraps weighing 0.710 grammes.”

The commander added that apart from Onyeabor Maduabuchukwu Friday who hails from Enugu State, other suspects are from Anambra State.

Izuchukwu Simeon, who was caught with drugs hidden in tins, said that he wanted to invest the N1 million they promised him in business.

“I suffered untold pain while in Brazil. I agreed to smuggle drugs because I wanted to settle down and further my studies. I have a diploma in Mechanical Engineering. I feel very bad,” he stated.
Akubueze Kyrian Nonso said that he was given the bag containing cocaine by a friend.

“I am a 2009 graduate of Economics but I have no job. I left Nigeria to Brazil in search of job opportunities. My condition of living in Brazil was worse than when I was in Nigeria. It was my friend that gave me the bag containing drugs,” he told investigators.

Obidike Onodyer said that he was paid N200,000 because he could only ingest 11 wraps of drugs.

“Drug trafficking was my last option to free myself from the harsh condition of living in Brazil. Unfortunately, I could only swallow 11 wraps so I was paid N200,000,” he stated.

Onyeabor Maduabuchukwu Friday who said that he was disappointed by his partner, confessed:
“I am disappointed and angry with my partner who was to collect the drug from me while on transit in Dubai. I had no choice but to come to Nigeria with the drugs when he failed to show up.
"I worked as a receptionist in Brazil to sustain myself. I had wanted to sell the drugs and use the proceeds to set up a business and prepare for marriage.”

Ifoh Emma was also full of regrets as he narrated what made him to get involved in drug trafficking.

“I am a barber and I have lived in Brazil for two years. I am married with two children. My only regret is the decision to travel to Brazil. It was the condition I found myself that made me to smuggle drugs. I was better doing business in Nigeria. I would not have smuggled drugs if I had not travelled to Brazil.”