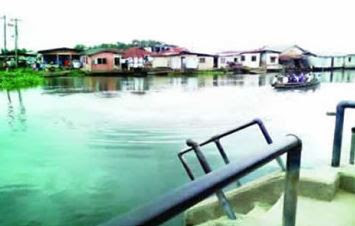 A 32-year-old graduate of Law, Dapo Olasore, was left to drown during a raid by officials of the National Drug Law Enforcement Agency inthe Agboyi, Alapere area of Lagos State.

According to Punch Metro, the incident happened on Sunday after the officials, who came in two vans without number plates, raided the area.

Olasore, aka Omopo, was about boarding a canoe to a neighbouring community to see a relative, when the officials stormed the community.They were said to have shot sporadically into the air, sending frightened residents fleeing in different directions.
However, Olasore, who was by the riverside, was said to have been held by the trousers by the NDLEA men; and in a bid to free himself, fell into the water.

A boatman, who attempted to save him, was said to have been threatened with guns, leading to the death of the victim.

It was learnt that the victim, who graduated from a university in Ondo State, joined the National Union of Road Transport Workers in 2014, after he could not get a job.His family was said to be resident in Ibadan, the Oyo State capital.

A witness and friend of the victim, Tosin Oshin, said the NDLEA officials arrived around 10.45am.

“It happened around 10.45am. We suddenly saw two white vehicles in our community. They began shooting into the air and everybody started running helter-skelter.

“They went to the riverside, where Omopo (Olasore) was about boarding a canoe. As Omopo saw one of them, he wanted to run like other people, but the officers held him. In the struggle to free himself, he fell into the river.

“A boat operator, who was about to rescue him, was threatened with guns. Omopo raised his hand and asked for help, but they didn’t help him.”

The boat operator, Dayo Seun, said before the victim finally drowned, he made an attempt to rescue him, but the officials prevented him.

“I was on the other side of the river when I saw the man fall inside the river. I quickly paddled my canoe to the place he fell into to rescue him, but they pointed their guns at me, and asked me to go back.”

A resident, Omolara Adekunle, said the anti-narcotics officials were always harassing residents, adding that after making arrests, they usually collected about N40,000 for bail.

“It is not only the NDLEA that come here to conduct this illegal raid. The police too are complicit; they have no fear of God.

“Those they arrest, they collect between N40, 000 to N45,000 from their relatives before they release them.”

Another resident, Ayeni Oluwatoyin, told our correspondent that one of the suspects arrested, one Sunday Babalola, was planning his graduation as a qualified mechanic for August 26.

Oluwatoyin, who showed our correspondent a vest the suspect had distributed to his friends for the celebration, said Babalola was giving out the vests when he was arrested.

“After collecting the vests from him, they (NDLEA men) grabbed him by the neck and hit him. The boy begged them, but they did not let him go,” she said.

A resident said the community would hold a procession for the victim, after his remains had been found.

“By Tuesday, his body should float. We will hold a candlelight procession for him on Friday,” she said.

The NDLEA spokesperson, Mr. Mitchell Ofoyeju, confirmed that there was a raid on the community by the agency, but denied knowledge that anybody was drowned.

“The NDLEA went in search of a notorious drug dealer, named Saheed, following an information on his activities, which has constituted nuisance to people in that neighbourhood.

“Unfortunately, we did not find him as of the time of getting to the place. One Babalola was arrested and he was found with 1.3 kilogrammes of cannabis. During the operation, some people escaped through the river because they knew their activities contravened the NDLEA Act. But we are not aware anybody drowned.”