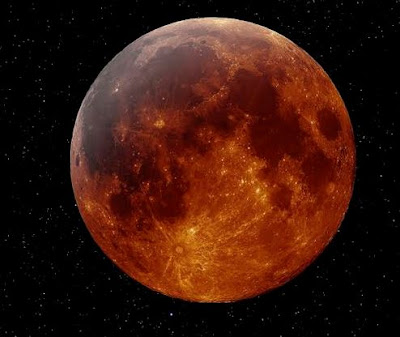 The National Space Research and Development Agency NASRDA, says Nigeria will experience a Lunar Eclipse on Sept. 28th. Lunar eclipse is an astronomical event that occurs when the earth comes in-between the sun and the moon, and the earth casts its shadow on the moon, so that the moon appears reddish.

A statement by the agency which was signed and released yesterday September 9th by the Deputy Director. Media and Corporate Communications, Felix Ale, says the lunar eclipse would begin on Monday September 28th from 1:11am, and will be at its maximum by 3:47 am, with its final contact at 6:22am.
“The lunar eclipse which is also called the blood moon will be observed in some regions around the world. Some of the regions seeing at least some parts of the eclipse include, Europe, South/East Asia, Africa, much of North America, much of South America, Pacific, Atlantic, Indian Ocean, Arctic, and Antarctica. Furthermore, the lunar eclipse will be visible in Abuja, and would begin from 1:11am, with total eclipse at 3:47am, and end by 6:22am. Nigerians are advised not to panic, and to go about their normal activities as it is just an astronomical event which will last for 5 hours 11 minutes,” the statement stated