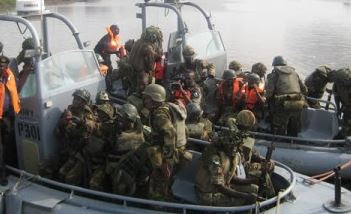 The commander of OPS, Maj. Gen. Alani Okunlola, conducted journalists round the seized products and other items close to Onne Port in Rivers State at the weekend.

He said the troops from OPS’ Sector 2 achieved the feat on September 23 during an anti-oil bunkering operation at Tamunotonye Ama village in Ogu Bolo local government area of Rivers State.

He said the illegally-refined AGO was loaded in eight large metal barges, adding that two of the arrested barges had seven-tanker truck loading capacity.

“The sites were destroyed in-situ while the barges were towed to Ogoloma jetty. The suspects are in the custody of OPS. The operation is a continuous one aimed at eradication of oil theft and illegal bunkering in the Niger Delta and other oil-producing areas.

“I want to reassure members of the public of the command’s renewed vigour and determination in the war against crude oil theft, pipeline vandalism and other criminal activities in oil-producing areas of Nigeria,” he said.