Home Celebs Gossip No Hot Househelps in my House Because Men Will always be Men: Chrissy Teigen

No Hot Househelps in my House Because Men Will always be Men: Chrissy Teigen 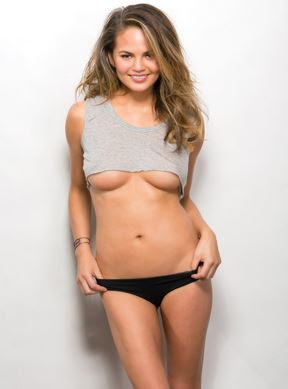 Chrissy Teigen loves her man John Legend and of course she trusts him but she still has qualms about bringing attractive female staffers into her home.

Teigen, who has been married to John Legend since September 2013, admits she does want kids one day — but will make do without a hot housekeeper.

It gets more interesting when you continue:

“No hot nannies, drivers or maids,” proclaimed Teigen at Lauren Conrad’s Fashion Week show Wednesday night. “It’s an ongoing joke in my house,” says the stunner, who is married to R&B crooner John Legend. “I do want to have kids one day, so it’s something that I have to think about. But the rule is no hot nannies. I trust John, but you never know with these men.” (And it’s no wonder, given the recent headlines involving Ben Affleck and his Las Vegas romps with his attractive au pair.)
Teigen realized that she had already made one grave mistake. “It’s too late for me, though, because I have a hot assistant — she is cute.” But Teigen admits that sometimes, it boils down to more than just looks.

“These days, it doesn’t really matter what you look like — sometimes cabin fever just strikes and men do the do. I have to keep an eye on my assistant now, damn!” she joked. “Christine, you’re done!”

Her opinions brings to mind the ongoing messy divorce between Jennifer Garner and Ben Affleck. Jennifer Garner was shocked when she found out that while she was away shooting a movie, Christine Ouzounian, the very attractive nanny she hired last spring to care for their children, began crushing on her husband Ben Affleck, dressing inappropriately around him and soon there were rumours that both had begun dating.